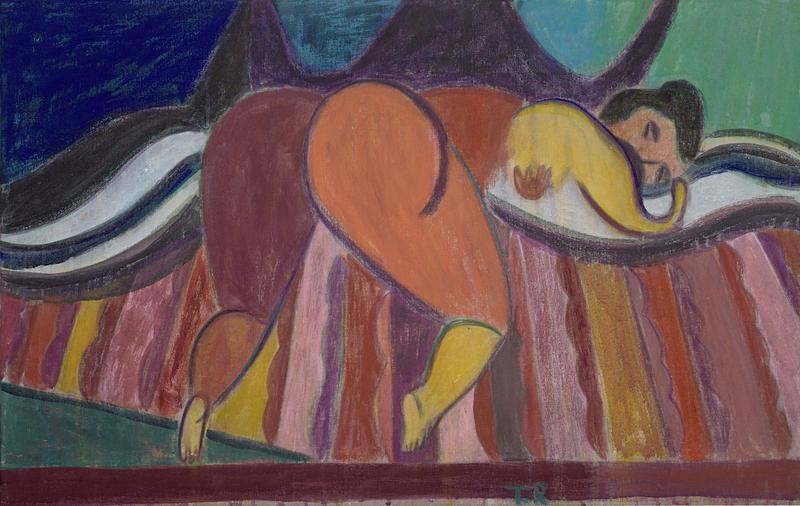 Cheim & Read is pleased to present an exhibition of recent paintings and drawings by Copenhagen-based artist Tal R. This is his second exhibition with the gallery; the first was in 2012. The show will be accompanied by a full-color catalogue with a story by Gary Indiana.

For the past two years, Tal R has been drawing women in confined interior spaces – hotel rooms, bedrooms, corridors, in the shower, and in front of mirrors. Though carefully chosen, his subjects are strangers and casual acquaintances. Tal R’s artistic process begins when he asks the women to pose for him: the foundation of his paintings rest on the anxiety of an uncertain exchange. This provides his work with palpable intensity and, as he notes, “awkwardness,” and is further emphasized by his use of saturated color and off-kilter compositions. Though central to the image, the female figures merge with their patterned, object-filled environments, often becoming abstracted or distorted. Tal R toys with perception and perspective, both actual and psychological, within the boundaries of narrative space, echoing the shifting rapport between the artist and his anonymous subject. With a suitcase of pink paper on hand, he draws his sitter in real time, later returning alone to his studio to transfer selected compositions to canvas. Painting with vivid pigments and fast-drying rabbit-skin glue, it is necessary for him to work quickly. Though this limits some of the more time-consuming delineations of his on-site drawings, it also permeates Tal R’s paintings with visceral emotion. As he stated: “I want to make concrete rooms where the experience is absolutely abstract.”

Titled “Altstadt Girl,” the paintings refer back to a time when Tal R was a professor at the art academy in Dusseldorf. He lived and taught in the Altstadt (“old town”) section of the city, and would often draw strangers in a nearby hotel room in the evenings after class. Translated as “old city girl,” the work’s title cites not only the location of his own past, but also the sense of history, and art history, that reverberates through his canvases. All interiors, the paintings are reminiscent of the patterned, colorful rooms of Matisse and Bonnard, with the psychological intensity of Balthus and the focused gaze of Alice Neel. Though he does not cite any artist as specific inspiration, his references are diverse, encompassing Fauvism, Expressionism and Symbolism, as well as folk art and children’s art. However, though Tal R confronts and appropriates art historical forms, namely the female nude, he grants little hierarchy to the different elements of his compositions. For him, the surrounding space is as important as the person he draws: “the face, the eyes, the pillows, the windows, the tapestry all carry information and meaning.”

While the outside world can be glimpsed through open windows and doors, the “Altstadt Girl” paintings are focused on the internal. This parallels the intuitive source of Tal R’s motivations; as he has said: “my work arises from the private.” Simultaneously beautiful and ominous, Tal R’s paintings and drawings are characterized by a charged duality, which stems in part from his childhood—his mother’s orderly, Scandinavian sensibility contrasted the Czechoslovakian Jewish side of his father—and his self-identification as an outsider. The contradictions of Tal R’s heritage guide his work. Ultimately, his work attempts to navigate the many intertwined layers of the psyche. Conveying the complexities and distortions inherent to our cultural and temporal experience, he says, “I once read that the future has a long past.”
www.cheimread.com