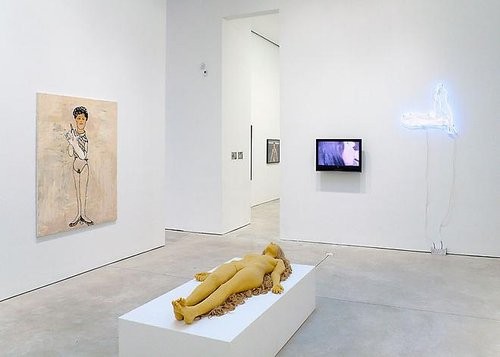 Opening Thursday 25 June from 6 to 8 pm.
Exhibition continues through 19 September 2009.

Cheim & Read is pleased to announce a group exhibition of women artists depicting the female form. With this premise, the show seeks to present a collection of works which reclaim the traditional domination of the “male gaze” and reorient the significance of the female figure to allow for more varied interpretations. A variety of mediums will be shown —sculpture, photography, video, painting and installation— and several different women artists represented, including: Berenice Abbott, Marina Abramovic, Ghada Amer, Diane Arbus, Vanessa Beecroft, Lynda Benglis, Louise Bourgeois, Kathe Burkhart, Julia Margaret Cameron, Victoria Civera, Rineke Dijkstra, Marlene Dumas, Anh Duong, Judith Eisler, Tracey Emin, Ellen Gallagher, Nan Goldin, Katy Grannan, Jenny Holzer, Roni Horn, Chantal Joffe, Deborah Kass, Maria Lassnig, Zoe Leonard, Sally Mann, Marilyn Minter, Joan Mitchell, Alice Neel, Shirin Neshat, Collier Schorr, Joan Semmel, Cindy Sherman, Mickalene Thomas, Hannah van Bart, Hellen van Meene, Kara Walker, Francesca Woodman and Lisa Yuskavage.
The “male gaze” is identified and defined by Laura Mulvey in her seminal essay, “Visual Pleasure and Narrative Cinema.”
Traditionally, the male, based on his desire for the female form, determines the way in which the female is perceived, thereby reducing her role to one of passivity and pleasure. As Mulvey writes: In a world ordered by sexual imbalance, pleasure in looking has been split between active/male and passive/female. The determining male gaze projects its phantasy on to the female form which is styled accordingly. In their traditional exhibitionist role women are simultaneously looked at and displayed, with their appearance coded for strong visual and erotic impact so that they can be said to connote to-be-looked-at-ness. Woman displayed as sexual object is the leit-motif of erotic spectacle: from pin-ups to striptease, from Ziegfeld to Busby Berkeley, she holds the look, plays to and signifies male desire.
Wendy Steiner, in her essay “Venus in Exile: The Rejection of Beauty in Twentieth-Century Art” elaborates further: The ‘self’ judging the beauty of art, for example, is a perceiver and hence a conscious subject, whereas the ‘Other’ is merely the object of this perception. If the Other is an artwork, it is inanimate by definition; many people would argue that the perception of a woman (or man or child) as beautiful reduces her to the status of a thing as well. Indeed, in the perennial symbolism surrounding beauty, the perceiver (the self) is active and ‘hence’ male, and the artwork or woman (the Other) is passive (to-be-seen) and ‘therefore’ female.
This exhibition attempts to debunk the notion of the male gaze by providing a group of works in which the artist and subject do not relate as “voyeur” and “object,” but as woman and woman. It would be interesting to ask the question how we would feel about the works in the exhibition if we were told they were made by a man.
www.cheimread.com