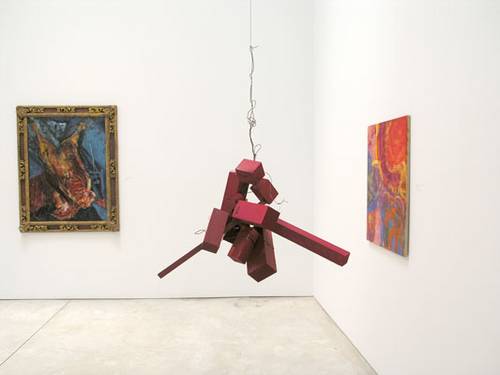 Willem de Kooning chose Chaim Soutine as his “favorite artist,” one whose paintings “had a glow that came from within.” Jack Tworkov spoke of “his [Soutine’s] completely impulsive use of pigment as a material, generally thick, slow-flowing and viscous, with a sensual attitude toward it, as if it were the primordial material, with deep and vibratory color.” Clement Greenberg wrote that “one has to go back to Rembrandt to find anything to which his touch can be likened.”

Cheim & Read is pleased to announce: The New Landscape / The New Still Life: Soutine and Modern Art, an exhibition featuring the landscapes and still lifes of Chaim Soutine in conjunction with works by contemporary painters and sculptors from the post-war generation to the present. Artists who have acknowledged the importance of Soutine to the development of their art and whose work reveals shared elements of expression and style include: Willem de Kooning, Jackson Pollock, Jean Dubuffet, Philip Guston, Lucian Freud, Frank Auerbach, Leon Kossoff, Georg Baselitz, Joan Mitchell, Richard Diebenkorn, Milton Resnick, Jack Tworkov, Alice Neel, Bill Jensen, Louise Fishman, Susan Rothenberg, Avigdor Arikha, Philippe Pasqua, Louise Bourgeois and Joel Shapiro. In embracing the unique power and vision of the earlier artist, these contemporary masters have also succeeded in bringing Soutine into the central stream of modern art history.

The exhibition opens June 22 and continues through September 9, 2006, and will be accompanied by a fully illustrated 132-page catalogue with text by Maurice Tuchman and Esti Dunow, co-curators of the exhibition and authors of the Chaim Soutine catalogue raisonné, and statements by the participating artists.

The curators have opted to focus specifically on the landscapes and still lifes vision of Chaim Soutine, rather than his equally important portraits, and on the relationship between these works and that of twenty-one artists of the past half-century.

All modern artists carry with them the consciousness of past art, and often incorporate into their work elements from vastly different periods and schools that resonate with their own souls. But few modern artists are especially eager to identify any particular predecessor as their major source, since no artist in this day and age wants to be perceived as a follower (and indeed none of the artists in this exhibition would ever be regarded as such). Be that as it may, the response of contemporary artists to the work and legacy of Chaim Soutine is of a profoundly different kind.

“Repeatedly,” the curators write, they “have been struck and at times even surprised by the spontaneous outpouring of praise for the work of Chaim Soutine by each and every artist contacted. This includes statements made decades ago by artists such as Francis Bacon, Willem de Kooning, Philip Guston, Jean Dubuffet and Richard Diebenkorn. When artists look at Soutine, something else comes into play: in fact there are two decisive factors: the essential vision of Chaim Soutine’s expressiveness, his natural masterly painterly powers; and his poignant status as an Outsider in the history of modernism.”

Indeed, since World War II, the truest champions of Chaim Soutine, who have demonstrated consistent and unflagging commitment to Soutine, whether overtly or subconsciously, have been the artists. To this broad generalization one must add the names of these influential art historians and critics: Meyer Schapiro, Clement Greenberg, David Sylvester. Professor Schapiro, with the image of Soutine’s paintings on view at MoMA in 1950, suggested to De Kooning that Woman I was successful and a finished work, and urged that it not be destroyed by de Kooning, as he was actively considering. Greenberg, also at this time, claimed that Soutine’s painterly touch could be likened only to Rembrandt, in an essay read by most every prominent art world figure at the time. David Sylvester’s dedication to Soutine in his 1963 Arts Council exhibition at London’s Tate Gallery altered the course of painting in London for decades to come, as can be seen today in the strong paintings of Cecily Brown and Jenny Saville.

Painters such as Francis Bacon acknowledged the shock of liberation when encountering Soutine in the London galleries in the late 1930s. Bill Jensen speaks of his epiphany at seeing Soutine’s Beef in the Minneapolis Institute of Art as a teenager. Similar statements of acknowledgment, often in extremely vivid language, were expressed by virtually all the break-through artists of the post-war period: de Kooning, Dubuffet, Philip Guston, Georg Baselitz and the subsequent generations of serious painters – that is, artists consumed by their search for seeing, artists not inspired in the main by the advantages of the camera (although often benefiting from photography) or by the sometimes academic strictures of Conceptualism.

Soutine’s example contributed to the formation and development of many artists’ work. In other cases, artists independently developed their work and found affinities in Soutine that validated and encouraged their own efforts.

This exhibition will demonstrate these influences and affinities – readily visible with certain artists in a common energy, brushwork, and all-over gesture, or a shared approach to subject matter; with others, less apparently so but fully ingested and transformed.

The exhibition features loans from the Albright-Knox Art Gallery (their monumental Soutine Carcass of Beef) and the Metropolitan Museum of Art (a Soutine masterpiece, View of Cagnes) and many prominent private collectors and galleries. Some works are for sale.