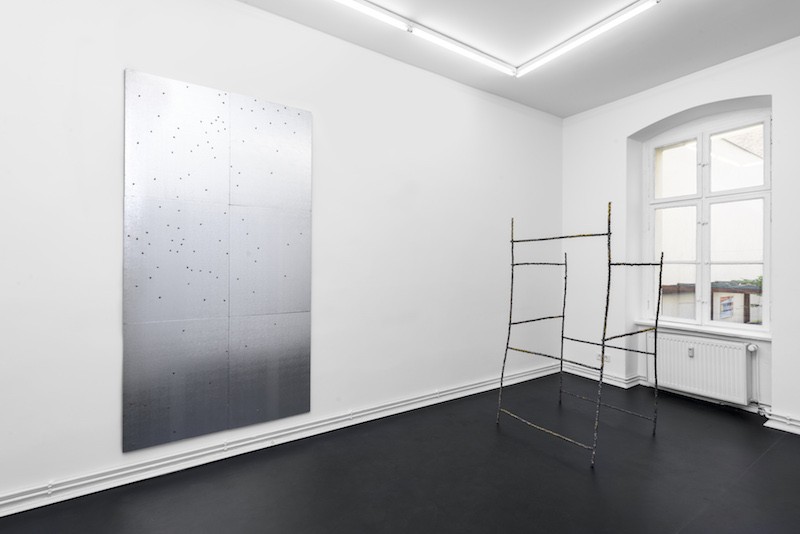 Galerie Jan Kaps presents Violet Dennison (b. 1989 in Connecticut, lives and works in New York), whose work frequently draws attention to the futility of scientific advancements whose primary aim is the improvement in the quality of life for humans and other species. For this show she has included the work 0201608996, 0201608511,0201608642, 0201608616, 0201608926, 0201608727, 0201608728 .... (2018), in which she cast genetically modified corn seeds in copper, and then positioned them to show the electromagnetic frequencies in her studio in New York. These seeds map the areas of the studio which most reveal present levels of harmful radiation. Attached to each seed is a passive Radio Frequency Identification (RFID) tag, which is commonly used to track live animals and commercial goods. Embedded into an insulating foam used in buildings for heat reduction, the tags become both a transmitter for the building and the work itself, while also remaining as individual receptors. If activated by a passive RFID scanner, they would each turn the work into a multiplicity of unique, yet similar, parts within a database.

Wschód presents Mateusz Choróbski (b. 1987 in Poland, works in Warsaw), who develops narration in relation to the specificity of architecture by either emphasizing or transforming particular existing elements. His sculptures focus on erasures, interruptions and diversity.

Foksal Gallery Foundation presents Monika Sosnowska (b. 1972 in Ryki, Poland, lives and works in Warsaw), whose sculpture curator Adam Szymcyzk had once described as “objects that are concrete equivalents of postsocialist visual culture, in which the substance remains in existence only as a remnant from the socialist past, or as a relic of the world before socialism, and where the image now replaces experience.” Flagpost (2018) resembles twisted fragments of metal or abandoned structures found in demolished buildings, as part of the artist’s larger practice of distorting and reappropriating architecture to reference her country’s past and calling attention to the commercially-driven contemporary homogenization of architectural styles after the modernist period.

ChertLüdde presents Heike Kabisch (b. 1978 in Münster, lives and works in Düsseldorf and Berlin), whose hand-sculpted clay figures embody human tensions and contradictions. In the last years, she has introduced printed images, neon, sound, and videos to her sculptures and installations. The Territory Shape (2018) is an installation which offers a view of the hidden self in all of its complexity, contrariness and beauty. Occupying the small upstairs room of the gallery, the work transforms the room using light and sculpture, the combination of different fragments and subjects giving rise to a surreal feeling of someone.

Antoine Levi presents Alina Chaiderov (b. 1984 in St. Petersburg, lives and works in Gothenburg and Stockholm), who engages with the psychological significance of medium, ranging from sculpture, online documentation to memory itself. Chain (2018) is a new installation of a Persian rug, resembling the one in her parents’ home, and four Wilson tennis balls, referencing the syndrome the artist has been living with since a few years. The recollection of her childhood home is an ongoing topic of the artist, who moved from Russia to Sweden in 1990 following the dissolution of the Soviet Union. Here, she makes use of symbolically charged objects to link two experiences.

The second work in the show, Hors d’oeuvre is part of a new series of photographs crystallizing diverseclose-up points of view situations with food that – behind the veneer of the extremely high banality of the depicted aliments – are the symbols of the souvenirs of past restrictions, of alive family traditions, and of the defiance to other substances forbidden by a restricted medical diet. Printed on Hanhemühle paper and framed in golden metal, these photographs expose the themes of a certainfragility mixed with the irony of looking alike food-spotting examinations.

Stereo presents Cezary Poniatowski (b. 1987 in Poland, lives and works in Warsaw). His new work Sting (2018) is part of a series of upholstery reliefs, an evolution from the artist’s practice of painting towards an interest in a craft that is conventionally disregarded as an artistic medium – thus the work is a result of a struggle on many levels.

Galeria Dawid Radziszewski presents Joanna Piotrowska (b.1985 in Poland, lives and works between London and Warsaw), whose photographs and films broach a study of interiority, encompassing questions on the identities of the subjects she uses, the psychologies of spaces, and the politics of relationality. In Untitled (2016), a movement is inspired by touch therapy used for people with autism, and the notion of self-touch as calming and therapeutic.

Lucas Hirsch presents Jannis Marwitz (b. 1985 in Nürnberg, lives and works in Brussels), whose figurative paintings fix an alien gaze upon European artistic tradition and history. Depicting grotesque Greek figures with a postmodernist touch, Untitled (2018) takes the human form in its Classical depiction and turns it into something along the lines of perversion.