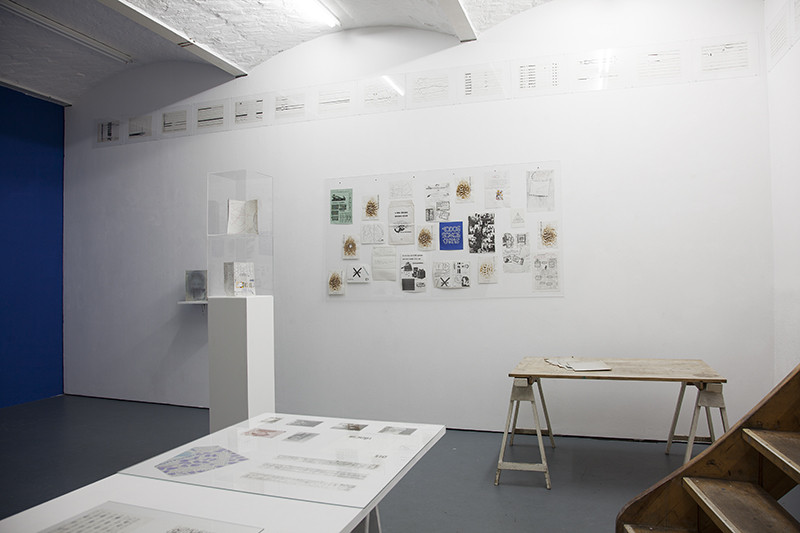 Throughout the 1970s, mail art connected hundreds of artists around the world, creating a networked community of exchange, and in some cases, political resistance. Chert is delighted to present an exhibition of the correspondence of Paulo Bruscky (BR, 1949) and Robert Rehfeldt (DE, 1931–1993), bringing together their embellished letters and art works sent over a period of around ten years, from 1975 onwards. These works allow an in-depth look at how two artists who felt a strong affinity with one another, but had never met, developed an enduring conversation and friendship.

During the 1970s, Bruscky and Rehfeldt maintained an intimate dialogue through their correspondence. While they met face-to-face only in 1982 when Bruscky travelled to Germany, the works they exchanged were gestures of intimacy that shared their experiences and ideas, rooted in their home cities of Recife and East Berlin. Although the artists’ practices and viewpoints could be considered similar, Bruscky was viewed as a communist in military-ruled Brazil, while Rehfeldt’s artistic activities were deemed suspicious enough to be monitored by the Stasi in the German Democratic Republic (GDR). The artists’ correspondence frequently touched upon state surveillance and issues of artistic liberty, including the arbitrary demands of the ideology of the nation state on its citizens. Rehfeldt’s phrase ‘CONTART’, a contraction of the words ‘contact’ and ‘art’, was an attempt to defy nationalist sentiments by uniting ‘art workers’ across borders through the principle of contact. While both artists reflected on their given local contexts incessantly, they also sent works that challenged, critiqued, and aimed to transcend the nation state.

Mail art creates personal archives that exist in artists’ homes around the world. This exhibition shows not just two artists’ works, but two private archives amassed by incidental custodians. The works exhibited here are from these personal archives in two distinct places: it’s not just about the work, but about where the work ends up. Rehfeldt’s mailings to Bruscky currently sit in Bruscky’s studio in Recife, Brazil, while Bruscky’s mailings to Rehfeldt are archived in a box in the home of Ruth Wolf-Rehfeldt in Berlin. These pieces will also be collected into a publication, which will reconstruct the artists’ exchanges.

Paulo Bruscky was born in 1949 in Recife, Pernambuco state, in North-East Brazil, a peripheral city in relation to the Rio de Janeiro-Sao Paulo axis of the Brazilian art world. Despite − or perhaps precisely as a result of − this apparent marginality, and despite his having initiated his career during the most oppressive years of the Brazilian dictatorship, Bruscky managed to create a body of work fully attuned to the trends of the time. Over the course of a career covering more than four decades, Bruscky never ceased to experiment and innovate: he employed photocopiers, blueprint machines and duplicating machines, besides stamps and postmark devices; he utilized medical equipment from the Agamenon Magalhães Hospital, where he worked for several years. As a mail artist, Bruscky joined an extremely dynamic and active international network, and he exhibited quite regularly abroad, besides establishing contacts with members of groups like the Gutai and Fluxus groups. From the 1990s, Bruscky expanded his production of small objects or visual poems, with a special focus on a significant series of artists’ books, in many cases simple boxes resembling books, adorned with phrases consisting of ironic and caustic plays on words. In 2004, Bruscky was invited to participate in the 26th São Paulo Biennial, his studio was transported from Recife and reconstructed in the Biennial’s pavilion.

Robert Rehfeldt was born in Stargard, Pomerania in northwest Poland in 1931. After his father’s early death he was first transferred to foster parents, then retrieved by his mother in Berlin. He was sent to a second foster home in Bad Ischl, Austria in 1940 via the Kinderlandverschickung, a rescue effort which brought thousands of children to the countryside. After the war he worked as a stone cutter’s assistant and a transportation worker, before studying art at the University for Fine Arts in West Berlin from 1948 to 1953. Afterwards he worked in East Berlin as designer, press draughtsman and photojournalist. From 1963, Rehfeldt freelanced and formed part of East Berlin’s experimental arts community. Rehfeldt was an active member of the international mail art network, and he formed extensive networks with artists in Eastern and Western Europe, the USA and Latin America. In 1975, in the first East German mail art exhibition, he asked artists from all over the world to design and submit postcards that he then exhibited at Galeria Teatru Studio in Warsaw. Rehfeldt’s Pankow studio in Berlin became the informal information clearing house for Western art developments among his fellow East Germans.

Zanna Gilbert is a postdoctoral fellow in the Department of Drawings & Prints at The Museum of Modern Art, New York. She organizes research activities dedicated to deepening the knowledge of history and artistic production in Latin America and is co-editor of post.at.moma.org. Zanna completed her PhD with Tate Research and the School of Philosophy and Art History at the University of Essex in 2012. Her research focuses on artists’ networks and the transnational circulation of art through the mail. Her areas of interest include Fluxus, mail, and Conceptual art, as well as modern and contemporary art in Latin America. In 2009, she organized an exhibition of Felipe Ehrenberg’s work, drawn from the Tate Archive, as well as a symposium at Tate Modern, ‘Outside the Material World,’ in conjunction with the exhibition Pop Life: Art in a Material World. She curated the exhibitions Intimate Bureaucracies: Art and the Mail (2011) and Contested Games: Mexico 68’s Design Revolution (2012), both at the University of Essex. She co-curated a retrospective of the Brazilian artist Daniel Santiago at the Museum of Modern Art Aloisio Magalhães, Recife (2012) and MAC-Niteroi (2014) with Cristiana Tejo; It Narratives: The Movement of Art as Information with Brian Droitcour (Franklin Street Works, 2014); and Edgardo Antonio Vigo: The Unmaker of Objects with Jenny Tobias (MoMA, 2014). She has taught postgraduate courses at the University of Essex and the National Autonomous University of Mexico (UNAM).

David Horvitz is an artist born in California in 1982 and lives in Brooklyn. Recent solo exhibitions include: Blum & Poe, Los Angeles; the New Museum; concurrent shows at Jan Mot, Brussels, and Dawid Radziszewski Gallery, Warsaw; Peter Amby, Copenhagen; Statements, Art Basel; Kunsthal Charlottenborg, Copenhagen; and Chert, Berlin. His work has been shown at EVA International 2014, Glasgow International 2014, LIAF 2013, MoMA, and The Kitchen. In New York, he has realized projects with Recess, Clocktower Gallery, post at MoMA, Printed Matter, Rhizome, and Triple Canopy. Recent artist books include ‘The Distance of a Day’ (2013; Motto Books & Chert) and ‘Sad, Depressed, People,’ (2012; New Documents). He has received the Rema Hort Mann Grant in 2011 and was nominated for the Discovery Award at Les Rencontres d’Arles in 2011. In 2013, he founded Porcino gallery in Berlin.
chertluedde.com