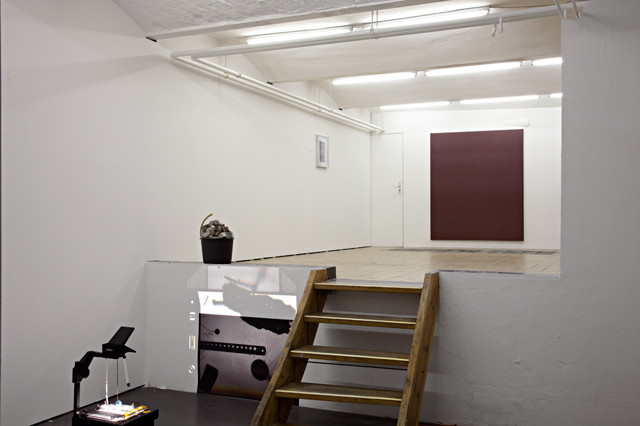 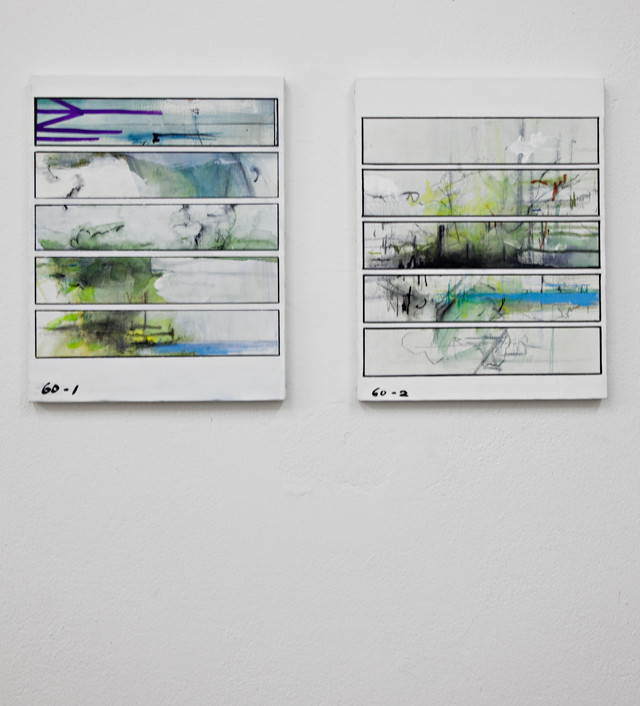 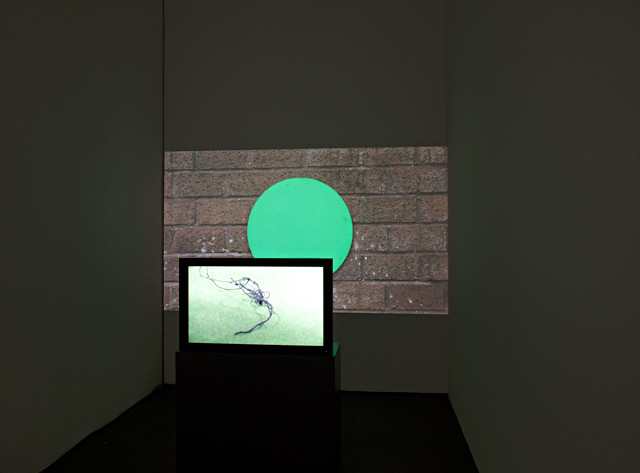 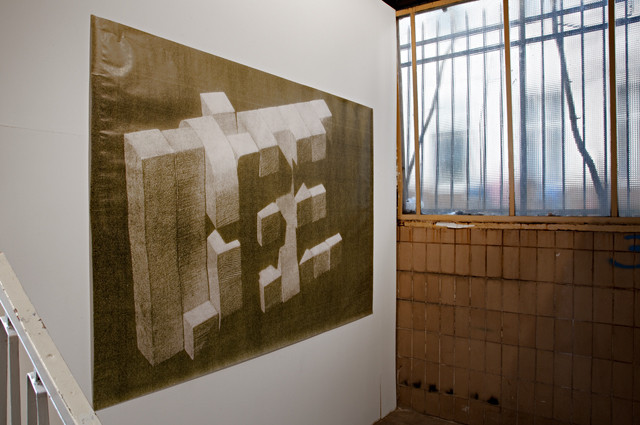 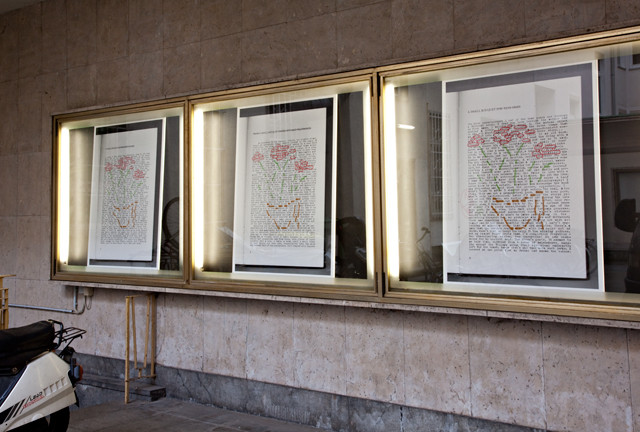 For the first exhibition in the new year, Chert gallery is delighted to present the group show ‘I ́ll explain you Everythiinnngggg’, a title which reflects on the difficulty of trying to be explanatory when talking about different artists and different artworks.
The title puts us directly into a future possibility, and in this sense responds to the very focus and necessity of working with young artists - to research into different practices, as a constant projection into coming chances, to look for, understand, discover new things to be said and listen. With this premises we invite the audience to engage in every individual piece, to get closer to the artists’ practice one by one, to think about their individualities and differences more then classifications, criterias and therefor, reductions.


Johann Arens (1981, Aachen, Germany).
The piece presented, "Untitled" (2010), was originally shown at "No Soul For Sale" at Tate Modern, London and "New Contemporaries", ICA London in 2010.
The work is a two-channel projection that intentionally disrupts and intervenes with the viewing process. A small monitor positioned in front of a bigger projection creates a visual metaphor in which the smaller screen appears to have been organically severed from its larger counterpart. The two screens simultaneously alternate in showing apparently incongruous scenes of exteriors/interiors. The impossibility of following both of the screens at the same time accentuates the physical limitations of grasping a reality that is both internalized and exteriorized. These images are accompanied by a soundtrack of ambient sounds of people walking through an interior space, giving the impression of an inhabited, animated place when in reality all that is seen is the static paraphernalia of domestic life: sofas, patterns, and plants. A complex but stylized investigation in forms, structures and processes of viewing and role-attributing, this work is a continuation of Arens’ interests in methods of cinematographic expression and viewing practices. (text by Snejana Krasteva)

Natalie Czech (1976, Neuss, Germany).
As one of the two artists displaying outside the gallery space, Czech will present two works: a part of the series “A Small Bouquet by Frank O’Hara” (2011) and "A hidden poem by Jack Kerouac" inside the Motto Bookshop. For the first piece, Czech invited seven people to write a text with O’Hara’s poem as their ‘template’: the marked words represent the calligram of the poem’s component words. The resulting inner monologues lay bare the image of people who are struggling internally, in search of uniqueness, a claim for autonomy, and the perfect expression, although the constant insecurity about the specific choice of words is tangible in every sentence.

Andrea Kvas (1986, Trieste, Italy).
The pieces presented in the exhibition are two canvases which are part of a new series of works that the artist is currently developing. It consists of paintings of the same color that are translatable as constant researches of ambiguity and discrepancies of a unique idea, a unique form, a unique color.
Their encounter with the audience and the fruition of the pieces is what matters most, as they are willfully far away from any idea of representation. The subtle changes between one painting and the other, the difference of placement in the space, the relation they create with the idea of observation of an art object, explain the interest and research of the young Italian painter.

Ella McCartney (1985, Cambridge, United Kingdom).
Exhibited on an outside wall of the gallery space, McCartney's work is an enlarged photocopy of a photograph of a wooden sculpture. The title, 'ILCVEAEEL', refers to the letters in the image. The piece was made via a number of translations. A selection of small wooden blocks that had previously been used in a printing factory can be seen here on an enlarged scale.
From some angles it is unclear that the blocks are letters and even after this is realised, the text still only reveals non-sense.

Kazuyuki Takezaki (1976, Kochi Prefecture, Japan).
The two paintings presented at Chert, are part of the series "Tokaido : The New Landscape Part II", where Takezaki refers to the traditional Shizuoka landscapes; a series of works first presented at the Vangi Musuem and soon after at MISAKO & ROSEN Gallery, Tokyo. Takezaki made these new works in an attempt to expand upon the possibilities raised by the classical landscape work of Japanese artist Hiroshige. Hiroshige produced a famous series of 53 landscape prints, therefor Takezaki began this new body of work from number "54" to suggest both a lineage and progression.

Ute Waldhausen (1972, GDR).
Her practice is deeply engaged with performance, mostly acted by the artist herself. The materials used for her installations consist of found objects, assemblages of different materials and images/photographs. The piece "Untitled", 2011, was originally presented in the artist's solo exhibition "Die vage gefühlte nächste Phase" at Projektwerkstatt in Leipzig. It represents a globe that we recognize as such only because of the presence of the typical round ruler attached to it. The form of the globe is reproduced thanks to different construction stones placed inside a bucket. Adding the ruler to this composition immediately creates a complex understanding and makes cultural references to something that would otherwise be a very common image; a construction bucket transporting simple stones.

Johann Arens was born in 1981 Aachen, Germany. From 2002-2006 he attended the Gerrit Rietveld Academy in Amsterdam where he received a BA in Fine Arts. In 2011, Arens graduated from Goldsmith College. Recent exhibitions include: "Drop after Drop", Galeria AS, Kraków, Poland; "Stressing spiritual needs even when selling ice-cream", DNA Gallery, Berlin; "The Deceptive Eye", The Institute of Continuation, Platform Stockholm, Sweden. Arens lives and works in London.
For more information see: www.johannarens.com

Natalie Czech was born in 1976 in Neuss, Germany.
She studied at Kunstakademie Düsseldorf.
Recently she has been exhibiting in solo exhibitions at Galerie Catherine Bastide, Brussels, Kunstverein Langenhagen, Kunstverein für die Rheinlande und Westfalen and at Uqbar, Berlin.
Upcoming projects include her participation at "Made in Germany Zwei", Sprengel Museum / Kestnergesellschaft / Kunstverein Hannover, a group show at Lia Rumma, Neaples and at Kai 10 / Arthena Foundations, Düsseldorf, and solo exhibitions at Ludlow 38, New York and NKV Nassauischer Kunstverein, Wiesbaden. Czech currently lives and works in Berlin.
For more information see: www.natalieczech.de

Kazuyuki Takezaki was born in 1976 in Kochi Prefecture, Japan. He received his BA from Kochi University in 1999 before relocating to Tokyo to continue his art practice. He is represented by MISAKO & ROSEN Gallery, Tokyo.
Takezaki's work was featured in "VOCA - Vison of Contemporary Art" presented at The Ueno Royal Museum and at the Vangi Sculpture Museum, Shizuoka, Japan. Takezaki lives and works in Tokyo.
For more information see: www.misakoandrosen.com