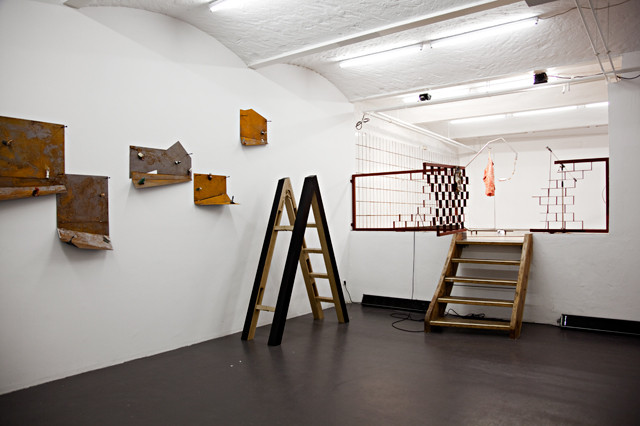 Chert is proud to present the first solo exhibition within the gallery context of Berlin based artist Kasia Fudakowski.

‘The hinge is like a crazy form of violence. All that two and fro, relentless back and forth but going nowhere. Sex and not having it. And relentlessly those tiny ball bearings just squeeze repeatedly over around one another, a rolling, lolling gorgeousness of grease and motion. Precise fluidity or fluid precision; cheek to cheek. Sweating, oozing and never drying up. Just wearing down. This body has an additional limb, it is spare, extra, on its own and therefore poor – a poor prop. Out on a limb, we would say. Or it’s a wobbly moustache and the potential for tweaking and eeking out begins again...’
(Helen Marten. 2011)

The works on display are linked to the ‘routine’ that Fudakowski will perform in the space at the opening of the exhibition. This performance is envisaged as a kind of ‘turning on’ of the exhibition, much in the vain of celebrity inaugurations of light displays at Christmas, as much of the work must be manipulated by the artist in order to be activated. The hinge is a major theme running through the work. The potential movement embodied in this mechanism as well as the inherent violence in the infinite swing allows Fudakowski to tread the shaky line between kinetic and static sculpture.

Her work has always had a latent humour to it. For the past year Fudakowski has been preoccupied with the philosophy of comedy and joke structure and it’s potential relationship to the construction of sculpture. Her work mixes abstract with figurative, using found and raw materials combined in constructions, which often serve to surprise and titillate with their mild poking irreverence.

With this exhibition, Fudakowski will draw on the performative techniques of entertainers in an attempt to question the predetermined assumptions and closed circles that exist within artistic interpretation.