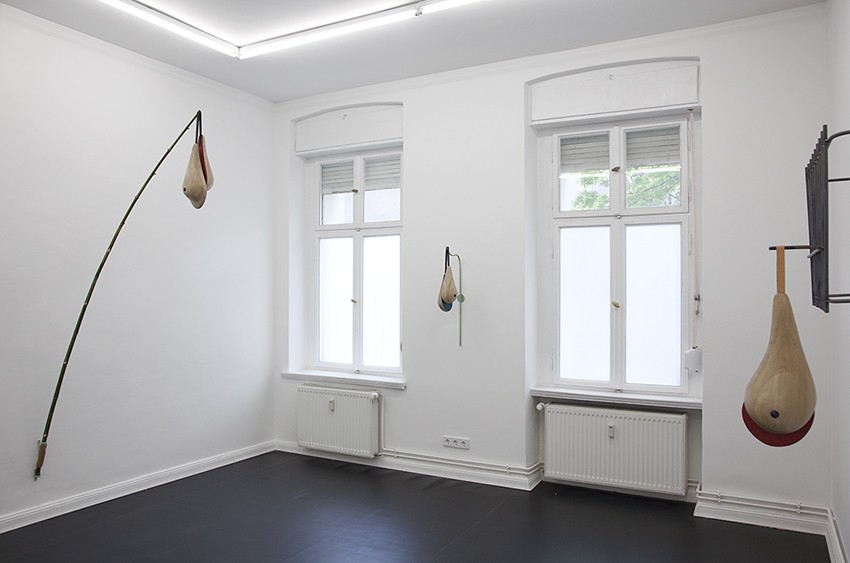 ChertLüdde is pleased to present Kasia Fudakowski’s third solo exhibition at the gallery.

Double Standards provides a stage for Fudakowski’s characteristic sideways humour, insisting that the visitor must choose between the right or left exhibition space, outlawing the possibility to see both, and therefore the complete exhibition. Her sculptural practice is however present in both spaces as well as, for the first time, her foray into narrative fiction. Just as her performances have done in the past, the publication “Info-Fuction”, written by Fudakowski, and designed by Bernd Grether, plays an integral role in the reading of her sculptures.

Fudakowski’s work over the past few years has been deeply influenced by her need to reconcile the achievements of two cult-status artists: Andy Kaufman and Lee Lozano. The fanatical admiration and acute paralysis that their radical approach to the pursuit of social extremes manifests in her, obliged Fudakowski to question the cause of her fascination and preoccupation.

Lozano (1930-1999), a painter and conceptual artist working in New York in the 60’s -70’s, effectively ended her career with two important and radical works: ‘Decide to Boycott Women’ and ‘Dropout Piece’, in which she demonstrated a complete refusal to engage with her own sex as well as her chosen professional circle.

Kaufman (1949-1984), from Great Neck NY, was the self-proclaimed ‘Inter-Gender Wrestling Champion’ and ‘song and dance man’, who challenged audiences to varying degrees of comic discomfort through his radically innovative and confrontational performative style, against the backdrop of second wave feminism and race-related activism of the late 70’s and early 80’s.

Both figures actively personified certain double standards, actively seeking to taunt and goad members of the same social group to which they belonged. What Fudakowski describes here as ‘intentional liberal baiting’ is particularly relevant today as the liberal left suffers an identity crisis against a backdrop of a resurgent right wing movement. Social-media echo chambers have suddenly revealed themselves in both the UK referendum and the US election’s unexpected results, begging the question: What art’s role can be within this new world order. Acknowledging the fact that one is often ‘preaching to the converted’, is at the basis of Fudakowski’s presentation.

The frustratingly binary nature in which she presents Double Standards, addresses the frustratingly binary nature of current political discourse while integrating her own habitual inclination to self-sabotage. Both her sculptures and publication reflect this idea of ‘liberal baiting’, bluntly poking at deeply divisive issues such as gender and political affiliation within the theoretically avowed art world. By equating the artist’s role to that of the jester; a person formerly kept in royal courts to both amuse and critique the ruler, Fudakowski points to the unique position an artist personifies in their responsibility to both exist within, and be critical of ‘the system’. Simultaneously, Fudakowski points at her own precocious as well as precarious position in interpreting the work of Kaufman and Lozano.

Fudakowski, born in London in 1985 studied at e Ruskin School of Drawing and Fine Art, Oxford University before moving to Berlin where she has lived and worked since 2006. Recent exhibitions include her “Fraustellung” series; Enthusiastinnen, Bethanien, Berlin; Stoikerinnen, Harburger Bahnhof Kunstverein; Pessimistinnen, ABC Berlin; and Sexistinnen at Art Basel Statements. In 2016 she received the Fürstenberg Contemporary residency grant and in 2017 the Villa Romana Award, Florence. This year Fudakowski will participate in Produktion! Made in Germany, Sprengel Museum Hannover and Bring Art into Life!, Museum Ludwig, Cologne.
chertluedde.com