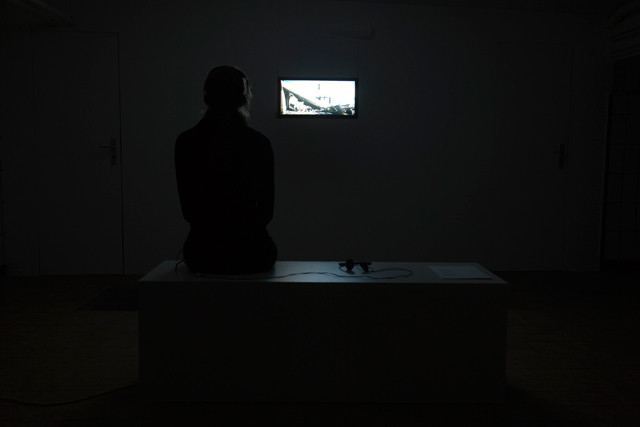 
Chert is proud to present “Shadows”, the second show in Berlin of Marcelline Delbecq (b. 1977, lives and works in Paris).

The exhibition is comprised of two separate installations, each addressing the notion of ‘Shadow’ in their own way.
From Plato’s cave to darkrooms and movie theatres, the projection of light is always the very condition that makes a shadow appear. In movies, landscapes and characters (fictional as well as real) or even hidden meanings can all be considered shadows. Literary characters are shadows as well - only words can bring them to light. A shadow is a shape that breathes yet can’t be caught. Like an image in the process of being revealed by drops of developer in a tank, it is there, yet it is not, a breath or a ghost.

On the ground floor of the gallery, ‘Nowhere (Mississippi)’ 2009, presents a series of four images and one text, each printed seperately on a large sheet of blank paper, evoking the presence/absence of an American writer turned into a ghostly character. The stillness of the images plays counterpoint to the movement and sound described in the text. These five prints together are traces of a vanished individual whose imprint on cinema and literature is definite.

The upper floor of the gallery has been turned into an intimate projection room where a still image in a horizontal light-box shows a desolate yet colorful scenery by the sea. Invited to sit on a bench, the viewer can listen to the voice of Sonic Youth singer Kim Gordon narrating the story imagined behind the image. Written as a ritornello for her extraordinarily melodious voice, ‘Rapture’ (2007) is an unsettling tale whose echo is likely to resonate long after the end of the show.

While preparing the exhibition, it also felt crucial for the artist to put together a selection of films to accompany and activate the stillness of the presented works. If mainstream films are easy to rent, artist films are not – their viewings are like precious stones that you feel lucky to discover every time they appear. Five films were therefore selected for the specific way in which each one addresses a different aspect of the exhibition’s purpose:

Their presence in the Chino is meant both as an echo and as a shadow presence of the works hung in the gallery.


The screening will take place in the following dates: