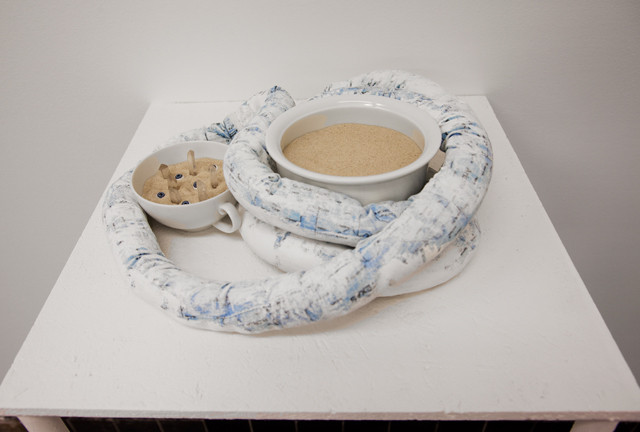 drinking a coke in a glass bottle and trying to picture myself living in the air bubbles
the little gas particles popping and stretching to the surface like little splash explosions.
a Paul Klee tree house
living on a branch
the context is yourself
and all tiny particles are atoms of the mind
tits

For her second solo show at the gallery, Swiss artist Vanessa Safavi (1980) has produced a new series of sculptures developed from her recent research on plastic materials. The sculptures represent a series of “desire-objects” as she defines them. Beyond objectivity, this series, or “soft sculptures”, attempt to articulate their own language of the formless and the internal, offering a deeper look into interiority.

In the lower gallery, the floor sculptures made of silicone sheets revolve around landscapes of shells and sand, merging the phenomenological material with the inner world of the imagination. As suggested by the title, “Intérieures” are metaphors of the skin, the body and the organs. Skin suffocates the organs and the desire for anything other than the self. The layers of soft, creamy silicon represent internal sculptures we can only fantasize about.

“Desiring Machine 1, 2 and 3” stand on the top floor of the gallery. The shared title refers to Deleuze and Guattari philosophical concept in their famous “Anti Oedipe” manifesto (1972). The desiring machine attempts to describe the concept of the unconscious as a “productive factory model”. In opposition to Freud’s concept, they assume that desire is not an imaginary manifestation built by trauma, but a productive force. A pile of drawers filled with breasts and sand, two leaves holding a bizarre ball in elastic hairs, or a enigmatic ouroboros creature seem to all symbolize the “factory model” producing a potential flux of emotions.

In each piece the female body is present. Safavi’s aesthetic is inspired by artists such as Carol Rama, Alina Szapocznikow, Lynda Benglis, Louise Bourgeois, Marisa Merz, among others. For them, the female body is more than a social tool against male dominance; it is a playful vessel through which to explore other forms of life and creativity.

To evoke this depth, this interpenetration of psychic and material planes, Louise Bourgeois proposed the term “fantastic reality”. The term elicits surrealist associations, suggesting a projection of unconscious desire into the realm of the real. “Fantastic reality”, however, counters the surreal with a psychoanalytic metaphor of depth and the physical reality of sculpture.

Needing something to exist materially, something that would act in the physical world, seeking a “fantastic reality”, a desiring machine that arises not in the mind, but through a bodily unconscious: “3 Pounds of Jelly” develops Safavi’s artistic practice engaged toward the urge of contemplation, dream and desire.

Vanessa Safavi was born in Lausanne, CH. She lives and works in Berlin.
Current and upcoming exhibitions include: “Der Tanz”, curated by Roman Kurzmeyer, Atelier Amden (solo); “I’ll be your Mirror”, Herald St, London; “One Torino”, Illy Prize, Castello di Rivoli Museum of Contemporary Art, Turin; among others.
Furthermore, she has been awarded this year Luci d’Artista, public commission in the city of Turin, November 2013.