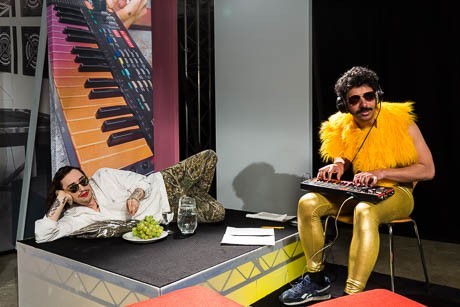 Chisenhale Gallery presents a major new commission by the Amsterdam and Berlin based Kurdish artist Ahmet Öğüt. For Happy Together: Collaborators Collaborating Öğüt stages a public discussion at Chisenhale Gallery, bringing together people of various professions and nationalities with whom he has previously collaborated. The gallery is transformed into a TV studio for the duration of the exhibition with a specially constructed set used to stage the discussion and, afterwards, to present a film documenting the event. The project opens with a performance of Reverb, a concert by the artist in collaboration with the band Fino Blendax, to welcome the collaborators to Chisenhale.

Happy Together: Collaborators Collaborating is a new work, comprising a live event and a film installation, but it also functions as a form of retrospective, collectively formed through the memories and experiences of Öğüt’s collaborators. Ten collaborators, including an auctioneer, a firefighter, a hairdresser, a stuntman, a lip reader and a sports caster, have been invited to Chisenhale Gallery to share their experiences of collaborating with Öğüt. The collaborators take the stage whilst Öğüt positions himself amongst the audience. Revisiting past collaborations in this new work, he explores the agency of those who participate in a work’s production and the nature of collaboration itself.

Collectively, Öğüt’s collaborators represent a selection of his work spanning almost a decade. A Berlin based barber, Alexander Peikert, represents the earliest project: Another Perfect Day, first presented at Pist, Istanbul in 2006, with subsequent presentations at the 5th Berlin Biennale (2008) and Sofia Contemporary (2013). Peikert cut hair by the light of a motorcycle headlight in a performance that made reference to the creativity and improvisation employed in the everyday lives of people living and working in unstable political and economic environments. Some of Öğüt’s most recent work is represented by Amsterdam based mixologist Tess Posthumus and London based musician Bora Akıncıtürk of Fino Blendax.

With this highly experimental exhibition format, Öğüt revisits some of the work for which he is best known. For Fahrenheit 451: Reprinted (2013), Öğüt reversed the role of the fire fighters in Ray Bradbury’s eponymous novel from 1953: instead of burning banned books, they were printed and distributed from a re-purposed fire truck by members of the Fire Department from Espoo, near Helsinki, one of whom – Jaakko Liesivouro – takes part in the event at Chisenhale. The Silent University is a knowledge exchange platform initiated by Öğüt in 2012 and operated by asylum seekers and refugees who are legally prevented from carrying out their professions in the countries where they are currently based. It is represented at Chisenale by Mulugeta Fikadu, an Eritrean-Cuban physiotherapist based in London.

Öğüt often employs humour to address complex issues, weaving loose narratives that connect collective memories, local histories and cultural identities. His work is rooted in the reality of everyday life and he uses the symptoms of social and political ideologies, systems and histories to produce ambitious projects that enact subtle shifts in perspective. In Happy Together: Collaborators Collaborating, Öğüt foregrounds the status and value of labour within the production of art, provoking a critical consciousness that calls into question the ethical and relational implications of the role of the artist and their work within the world.

Ahmet Öğüt (born 1981, Diyarbakir, Turkey) is a Kurdish artist living and working in Amsterdam and Berlin. Recent solo exhibitions include Forward!, Van Abbemuseum, Eindhoven (2015); Apparatuses of Subversion, Horst-Janssen-Museum, Oldenburg; Strategies for Radical Democracy, The Blackwood Gallery at University of Toronto (both 2014); and Fahrenheit 451: Reprinted, Checkpoint Helsinki (2013). He has participated in numerous group exhibitions, including 8th Shenzhen Sculpture Biennale (2014); Performa 13, New York (2013); 7th Liverpool Biennial (2012); and the 12th Istanbul Biennial (2011). Öğüt was artist in residence at the Rijksakademie, Amsterdam, 2007–2008, and at Delfina Foundation, London, in collaboration with Tate, 2012. He has taught in Dutch Art Institute, Netherlands, 2012 and the Finnish Academy of Fine Arts, Finland, 2011 and 2013. His solo exhibition, Forward, opens at the Van Abbemuseum, Eindhoven, in March 2015.

The public discussion at Chisenhale Gallery is chaired by Andrea Phillips, Professor in Fine Art and Director of PhD programmes in the Art Department at Goldsmiths. The film of the event is produced by the UK educational charity WORLDwrite, which encourages young people to use film and new media technologies.

This is the first solo exhibition in a UK public institution by Ahmet Öğüt and is commissioned as part of How to work together, a shared programme of contemporary art commissioning and research devised by Chisenhale Gallery, The Showroom and Studio Voltaire. The other commissioned artists for 2015 are Sanya Kantarovsky at Studio Voltaire (16 April – 7 June) and Wendelien van Oldenborgh at The Showroom (29 April – 20 June). This second round of exhibitions builds on the success of last year’s commissions by Céline Condorelli (Chisenhale Gallery), Gerry Bibby (The Showroom) and Ella Kruglyanskaya (Studio Voltaire).

Ahmet Öğüt, Happy Together: Collaborators Collaborating is commissioned by Chisenhale Gallery. The commission is supported by the Mondriaan Fund, SAHA Association, Maya and Ramzy Rasamny and Yana and Stephen Peel.

With special thanks to Panalux and Acre Jean.

How to work together is supported by a capacity building and match funding grant from Arts Council England through Catalyst Arts, with additional funding in the second year from Bloomberg, Jerwood Charitable Foundation, Resolution Property and Bilge & Haro Cumbusyan. For more information visit www.howtoworktogether.org.
www.chisenhale.org.uk