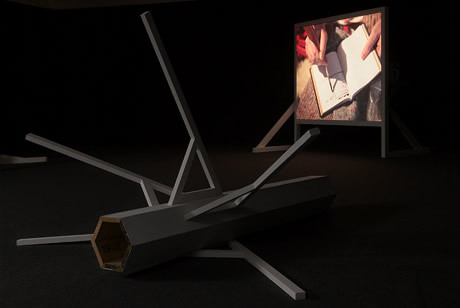 Chisenhale Gallery premieres a new film and installation by Anja Kirschner and David Panos co-commissioned by Chisenhale Gallery and Centre for Contemporary Arts (CCA), Glasgow. The Last Days of Jack Sheppard is a film based on the inferred prison encounters between the 18th century criminal Jack Sheppard and Daniel Defoe, the ghostwriter of Sheppard’s ‘autobiography’, set in the wake of the South Sea Bubble of 1720 – Britain’s first recorded financial crisis.

A critical costume drama constructed from a patchwork of historical, literary, and popular sources, the film’s fragmented narrative structure explores the connections between representation, speculation and the discourses of high and low culture that emerged in the early 18th century and remain relevant to the present day. Filmed in the Chisenhale Gallery space, The Last Days of Jack Sheppard is presented within an installation fabricated from elements of the original set palying on the notion of the ‘historical construct’.

A publication incorporating Kirschner & Panos’s script and research material co-published by Chisenhale Gallery & CCA, Glasgow accompanies the exhibition. Kirschner and Panos are also producing a limited edition print which will be on sale from the gallery. Please visit our shop area for more information.

This will be Kirschner and Panos’s first major solo show in the UK and is the first commission in the new exhibition and event programme by Chisenhale Gallery’s recently appointed director Polly Staple. The exhibition will be presented at CCA, Glasgow between 8th August and 26th September 2009.

Anja Kirschner (b.1977, Munich) and David Panos (b.1971, Athens) live and work in London. Their recent film, Trail of the Spider (53mins, UK, 2008), a ‘western’ filmed in Hackney and Essex, premiered at Tate Modern followed by a week-long show as part of ‘Nought to Sixty’ at the ICA and a LUX screening at Chat’s Palace in Hackney. Polly II – Plan for a Revolution in Docklands (30mins, UK, 2006), a dystopian pirate adventure, has been screened widely both in the UK and abroad. Venues included Tate Modern, BFI Southbank, Transmission Gallery, Glasgow, NAi, Netherlands and the Oberhausen Film Festival, Germany.

The Last Days of Jack Sheppard is approximately 55 minutes long and will be screened on the hour every hour.

Sunday 10 May, 2pm
Writer Marina Vishmidt leads a tour of the exhibition.