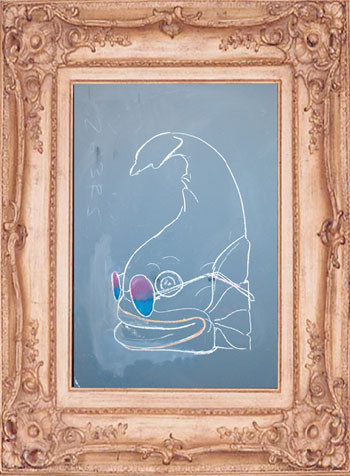 In her first solo commission for a London public gallery Anthea Hamilton uses the history of the gymnasium as a conceptual framework in which to situate her work.
The word gymnasium, originally meaning 'place to be naked', was first used in ancient Greece to describe a site for both physical and intellectual education. For the ancient Greeks gymnasia were designated places for exercise (usually performed naked), bathing and studies, founded on the belief that physical education and cognitive learning were of equal importance. Hamilton's exhibition develops from her interest in this ancient arena of physical prowess, aesthetic appreciation of the body and intellectual pursuits, as well as from contemporary gym culture.
Hamilton's eclectic formal vocabulary intersperses a diverse array of found objects with fragmented elements of figurative sculpture created by means of her characteristic 'cut-out' technique. Silhouettes of legs and arms – Hamilton's own in many cases – populate her immersive installations imbuing them with a performative potentiality. As these figurative proxies assume the role of protagonists, the assembled objects become props in abstract narrative scenarios. The physical appeal of the work's materials and construction leads the viewer into a vividly realised but unstable psychological territory through Hamilton's use of humour, eroticism, deft substitutions and juxtapositions.
In Gymnasium, Hamilton develops several motifs particular to her practice. Her recurrent use of the 'cut out' is brought to bear on Chisenhale's architecture, particularly on the entrance which has been transformed into a monumental cut-out which frames the space beyond and dramatises visitors' passage into the gallery. Alternative and unusual vantage points are also provided by means of an exaggerated podium-like construction which functions simultaneously as an obstacle and a potential means to gain an elevated overview of the exhibition. The careful juxtaposition of objects is articulated through choreographing contrasting surfaces – hard against soft, natural against synthetic – creating a tension which binds together Gymnasium's seemingly wayward panoply of objects. The final form and arrangement of her installation attempts to create an ongoing sense of contingency and surprise whereby everything could change and nothing appears settled.
Anthea Hamilton (1978) lives and works in London. She was recently included in the exhibitions Strange Solution, Tate Britain, London and Martian Museum of Terrestrial Art, Barbican Art Gallery, London (both 2008). Gymnasium is a joint commission with Kunstverein Freiburg, Germany and will be presented in Freiburg from 23 January to 15 March, 2009.
www.chisenhale.org.uk