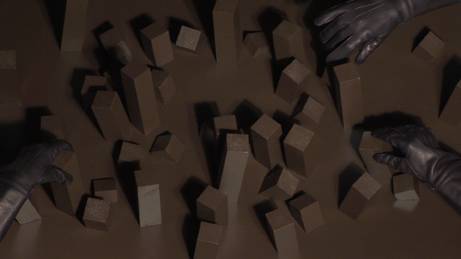 BERN BEHR
"House Without a Door"

Chisenhale Gallery is pleased to present a new film by Bernd Behr in his first major exhibition in a UK public gallery.
House Without a Door explores the relationship between film and architecture, linking a US military test structure with studio sets of 1920s German expressionist film. It will be a large-scale single-screen work accompanied by a specially commissioned soundtrack by Marcus Fjellström.
In 1943 the US military commissioned émigré modernist architect Erich Mendelsohn and Hollywood studio RKO to design and build a replica Berlin housing estate in the Utah desert to test incendiary bombs eventually deployed in the air raids on Dresden and Berlin. Behr’s interest lies in the performative nature of the building, embodied in its cultural/geographical displacement and its function of repeatedly performing its own destruction. Borrowing its title from the early expressionist film House Without a Door (1914), which has no surviving print, the work fictionalises the now inaccessible interior of this building through a set of references to 1920s German expressionist films, including Faust (F.W. Murnau, 1926) and Dr. Mabuse (F. Lang, 1922). These references reflect Mendelsohn’s own relation to expressionist theatre, Weimar filmmakers and the proximity of the test site to an actual village in Utah called ‘Faust’.
A three-page feature in the autumn issue of Vertigo magazine will function as a parallel space for the work, exploring the web of associations underpinning this project.
House Without a Door developed from a residency Behr held at The Center for Land Use Interpretation, Utah, in 2005, and is supported through a 2006 London Artists' Film and Video Award (Film London) and University of Gloucestershire.
Bernd Behr was born in Germany in 1976 and lives and works in London. He is a recent recipient of a deciBel Award for Artists, 2006.