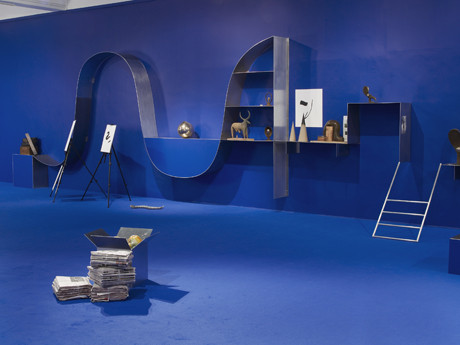 Preview: Thursday 27 February 2014, 6.30-8.30pm Chisenhale Gallery is pleased to present an ambitious new commission and the first UK solo exhibition by French, New York-based artist, Camille Henrot (b. 1978). Entitled The Pale Fox, this new installation develops from Grosse Fatigue (2013) – the film Henrot presented at the 55th Venice Biennale, 2013, for which she was awarded the Silver Lion for most promising young artist. Demonstrating the breadth of Henrot’s output, this exhibition comprises an architectural display system, found objects, drawing, bronze and ceramic sculpture and digital images.

The Pale Fox articulates our desire to make sense of the world through the objects that surround us. Unfolding like a frieze across the four walls of the gallery, a polymorphous aluminium shelf provides a structure wherein the four points of the compass are aligned with stages in an individual lifecycle, the evolution of technology, philosophical principles of Leibniz and the four Classical elements: fire, water, earth and air. This highly personalised aggregation of distinct systems of thought is presented through an intense accumulation of objects and images encountered within a highly constructed, meditative environment.

The title of Henrot’s exhibition is taken from an anthropological study of the West African Dogon people published by Marcel Griaule and Germaine Dieterlen in 1965. Dogon mythology is thought to incorporate the belief systems of several different cultures, as well as astronomical, mathematical and philosophical systems of thought. Within this meta-narrative, the character of the ‘Pale Fox’ represents disorder and chaos but also creation, bringing about the formation of the sun.

For Henrot, the fox is an ambivalent animal and a potential model for our primitive selves, thriving on waste and instigating a cycle from which accumulation and excess become productive again. Henrot is interested in entropy and disorder as fertile foundational principles in creative practice and the construction of knowledge. The Pale Fox reveals the element of disorder implicit in any system and the contradiction of this aspect of failure as a condition of its completion.

Exploring varying scales and chronologies, from the history of the universe to the universe of the artist’s studio, the exhibition becomes a model for information storage and retrieval – rolled and stacked images become objects, and objects from museum collections are substituted with Ebay purchases and scrolling slideshows on digital picture frames. Henrot relates the construction of knowledge to haptic and sensual experience, reflecting our common desire, evidenced in spheres from the artistic to the domestic, to create model worlds of fantasy and symbolism as a means of inhabiting reality.

The Pale Fox is commissioned and produced in partnership with Kunsthal Charlottenborg, Copenhagen; Bétonsalon – Centre for art and research, Paris and Westfälischer Kunstverein, Münster, where the exhibition will be presented in 2014-15.