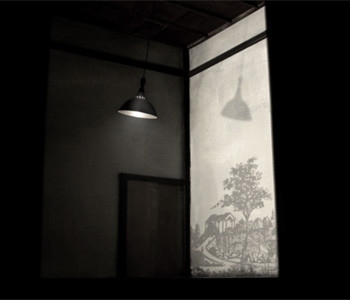 Hiraki Sawa first gained attention in the UK through East International and New Contemporaries in 2002. For his first solo exhibition in a London public gallery, Sawa has created a newly commissioned multi-screen video with a soundtrack produced by Takeshi Nishimoto and edited by Dale Berning. Hako comprises six videos with subtle digital animation depicting extraordinary transformations of landscapes, a nuclear powerstation, a Shinto monastery and constructed model interiors of rooms and corridors.

Hako’s development began with Sawa’s interest in a Victorian doll’s house and box garden therapies. In this form of treatment a doctor gives a patient an empty wooden box along with a set of miniature objects. Each of these objects is selected for its symbolic meaning, as determined by the doctor. The patient is then asked to furnish the box with these elements, to create his or her personal garden, which the doctor then analyses. In both the box garden and Sawa’s doll’s house there is a controlled structure where rules and selected elements allow improvisation and play to reveal unconscious processes.

Similarly the six scenes and events in Hako are charged with psychological and mythological aspects as they shift between fantasy and reality. In these evocative interrelated films, fireworks explode over a Japanese nuclear powerstation set dramatically at the ocean’s edge, birds flock around warm churning water pumped into the sea at Dungeness, a miniature toy clock is animated to keep real world time, a carefully cultivated forest surrounding a Shinto monastery is shown as the light shifts, and romantic land and seascapes morph into one another.

Hiraki Sawa received an MFA in Sculpture at the Slade School of Fine Art, London in 2003. He has a forthcoming solo exhibition at Centro de Arte de Caja (CAB) in Burgos, Spain. Previous solo exhibitions include First Center for the Visual Arts in Nashville, USA; Aichi Arts Centre in Aichi, Japan; National Gallery of Victoria in Melbourne, Australia and Firstsite in Colchester, UK. His work was also shown in Around the World in Eighty Days, a joint exhibition between South London Gallery and ICA in London in 2006. Hiraki Sawa was born in Japan in 1977. He lives and works in London and is represented by James Cohan Gallery, New York and Ota Fine Arts, Tokyo.
www.chisenhale.org.uk