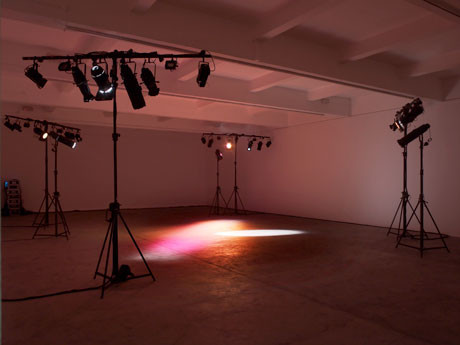 Chisenhale Gallery presents a major new commission by Janice Kerbel. Described by Kerbel as ‘a play for stage lights’, Kill the Workers (2011) takes its cue from dramatic narrative but is executed solely by theatrical lighting.

Following the conventions and mechanics of stage lighting and dramatic genres and forms Kerbel has written a cue script for lights in the vein of a mythic odyssey. Desiring to be seen as light itself, rather than as light serving to illuminate form, a single ‘spotlight’ becomes the key protagonist on an epic journey of conflict and transformation to become one with the ‘worker’ lights, and to realise his dream of ‘open white’.

The piece condenses a 24-hour day-to-night structure into 24 minutes, within which dramatic tension and plot progression are conveyed through changes in the intensity, colour, pattern and direction of the stage lights. The work consists only of a lighting rig and the lights become both characters enacting scenes -‘the farewell’, ‘lost in the forest’ or ‘dream interlude’ - and technicians responsible for conjuring atmosphere.

Kill the Workers ultimately disregards the conditions of theatre and its associated positioning of the audience, actors or the dramatic structures from which it is derived. Instead, a classic struggle is staged between the real and the symbolic through minimal and spatial means. This work continues Kerbel’s interest in ‘theatrical performance and the desire to find form for things that cannot be seen but which conjure alternative states’.

Kerbel’s work is often produced in relation to existing logic systems, re-configuring the principle applications of organising structures to better define the relationship between reality, imagination and illusion. Her work ranges from installations to book projects, prints and audio works. In 2006, Kerbel wrote Nick Silver Can’t Sleep, a radio play for insomniacs produced by Artangel Interaction and broadcast on Radio 3, starring Rufus Sewell and Fiona Shaw. Most recently, Kerbel presented Ballgame (2009–ongoing), for which she studied the language of baseball commentary in order to script a full 90-minute, 9-inning game for a voice actor.

Kill the Workers (2011) is co-commissioned with Badischer Kunstverein, Karlsruhe, Germany and will be presented there in a solo exhibition, 1 July - 11 September 2011.
www.chisenhale.org.uk