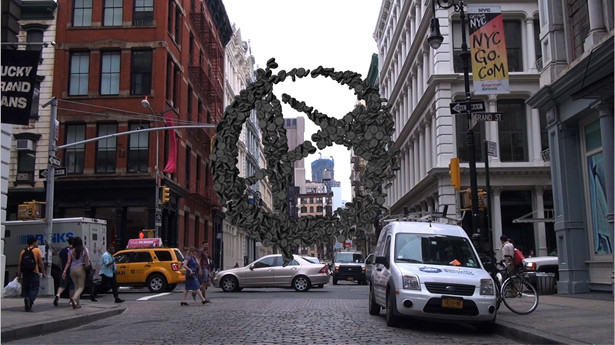 Chisenhale Gallery presents the first UK solo exhibition by New York-based artist Jordan Wolfson and the UK premiere of Raspberry Poser (2012). This is Wolfson’s most recent video piece and the final instalment in a trilogy of works also comprising Con Leche (2009) and Animation, masks (2011).

Establishing himself over the past decade as one of New York’s leading young artists exploring new media and our contemporary image world, Wolfson’s Chisenhale Gallery exhibition follows presentations in 2013 at S.M.A.K., Ghent and Redcat, Los Angeles and the publication of his first major monograph, Ecce Homo / le Poseur. Within Chisenhale Gallery’s programme, Wolfson’s exhibition builds on commissions by artists such as Helen Marten, Ed Atkins, James Richards, Josephine Pryde and Hito Steyerl whose work explores the material qualities of our present moment, the new forms and technologies that define us, and their existential resonance.

Wolfson produces psychologically complex works in which images and language undergo dream-like repetitions and rehearsals. He returns to universal themes such as love, desire and the human condition through his exploration of ideas of subjectivity, performance and the role of the artist. Visually stunning, Wolfson’s works juxtapose a range of animation techniques, collage, found and filmed footage and sound displayed in meticulous installation environments.

In Raspberry Poser, episodic sequences of computer generated imagery (CGI) and found images are interwoven with the activities of two characters – a malevolent cartoon ‘angry kid’ with an insatiable appetite for self-inflicted violence, and a listless punk played by Wolfson himself. These smirking protagonists wreak low-grade havoc in their respective cartoon and bourgeois worlds playing out a sense of dissonance also present in Wolfson’s unseemly combinations of animated objects and found images, which seduce and repulse in equal measure.

Wolfson’s fast-paced editing style and sampled soundtrack are reminiscent of the easily consumable format of the music video but like his image content, which oscillates between the nostalgic and the offensive, the use of music in Raspberry Poser is as jarring as affective. Swooning ballads lull the viewer, fading, slowing in tempo and then suddenly increasing uncomfortably in volume or stopping abruptly, giving way to self-conscious silences.

Raspberry Poser is Wolfson’s most technically ambitious video to date, layering digital video, CGI and hand-drawn animation with found images and his own performance to camera. As in previous works, Wolfson exploits the undefined space between artifice and reality offered up by new CGI techniques. However, unlike the digital avatar in Animation, masks, whose gestures and utterances create an alarming dissonance, the character at the centre of Raspberry Poser is Wolfson himself – a more ambiguous caricature who draws the viewer into an awkward intimacy. Alongside the dancing viruses – potent reminders of the ultimate fragility of the human body – Wolfson’s melancholic punk appears as vulnerable as he is cocksure.

Jordan Wolfson’s exhibition at Chisenhale Gallery is supported by James Lindon, Bilge and Haro Cumbusyan and the Jordan Wolfson Supporters Circle. With thanks to Sadie Coles HQ, London.
www.chisenhale.org.uk