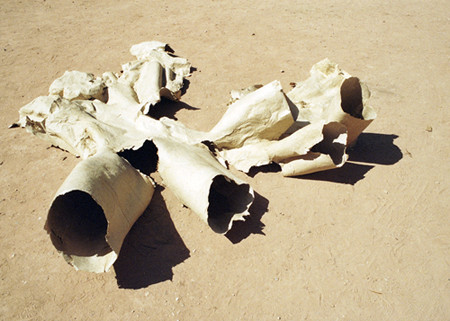 © Mariana Castillo Deball
MARIANA CASTILLO DEBALL
What we caught we threw away, what we didn't catch we kept
24 May - 14 July 2013

Chisenhale Gallery presents a solo exhibition by Mariana Castillo Deball: What we caught we threw away, what we didn’t catch we kept. A co-commission by Chisenhale Gallery, Cove Park, Scotland – where the artist undertook a residency in 2012-13 – and CCA Glasgow, who present the exhibition from 6 April to 18 May 2013. This joint commission has enabled Deball to carry out extensive research in Scotland and London, and to produce a major new body of work.

What we caught we threw away, what we didn’t catch we kept explores the biography of objects, and makes connections between 19th-century explorer and archaeologist Alfred Maudslay, artist Eduardo Paolozzi and contemporary anthropologist Alfred Gell. The exhibition combines sculpture – made using paper and plaster casting techniques – with drawing and printmaking, alongside archival images from Deball’s research.

Deball presents a series of paper tree casts, made in Mexico, Costa Rica, Berlin and at Cove Park – fabricated using a papier-mâché technique known as ‘paper squeeze’, pioneered by Alfred Maudslay in his archaeological fieldwork at Mayan sites in Mexico and Guatemala. Deball has studied Maudslay’s paper moulds in the British Museum stores, and describes them as ‘ghost objects... quiet witnesses of an attempt to capture and absorb the object of observation’.

The museum initially rejected Maudslay’s paper moulds as mere replicas but despite being such fragile objects they have gone on to outlive many original artefacts. Maudslay’s moulds are rarely exhibited but a small selection was included in Lost Magic Kingdoms and Six Paper Moons from Nahuatl – a display of objects from the British Museum’s Ethnographic Collection, selected by artist Eduardo Paolozzi and shown at the Museum of Mankind, London in 1985. Paolozzi’s selection focused on ‘leftovers’ from the museum storage deemed of little value, including Maudslay’s paper moulds.

During her residency in Scotland, Deball also studied Paolozzi’s extensive personal archive. She draws parallels between Maudslay and Paolozzi’s methodologies – describing them as ‘a sort of viral exploration’ – and their contribution to our understanding of material culture by collecting, recording and organising found materials through which a new pattern of value and ethnographic enquiry emerges.

Deball’s own paper casts are titled, ‘Tree Traps’, with reference to an essay by anthropologist Alfred Gell: Vogel’s Net: traps as artworks and artworks as traps – exploring how systems of signification form definitions of art and artefact. Deball’s interest in Gell introduces the substantial body of research behind her exhibition but also alludes to the role of her own work as a ‘trap’. Deball responds to her predecessors’ legacy and reflects on the agency of objects and their shifting status across cultures, disciplines and time, focussing our attention on how our image of different cultures is determined by the filter of objects.