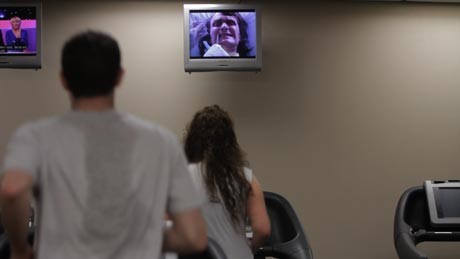 Chisenhale Gallery premieres a new film and installation commission by Melanie Gilligan. Gilligan works in video, performance, text, installation and music. Her new film, Popular Unrest, is a multi-episode drama set in a future much like the present. Here, however, all exchange transactions and social interactions are overseen by a system called ‘the Spirit’. A rash of unexplained killings have broken out across the globe. They often take place in public but witnesses never see an assailant. Just as mysteriously, groups of unrelated people are suddenly coming together everywhere, amassing new members rapidly. Unaccountably, they feel a deep and persistent sense of connection to one another.

The film explores a world in which the self is reduced to physical biology, directly subject to the needs of capital. Hotels offer bed-warming servants with every room, people are fined for not preventing foreseeable illness, weight watching foods eat the digester from the inside and the unemployed repay their debt to society in physical energy. If on the one hand this suggests the complete domination of life by exchange value do the groupings offer a way out?

Shot in London with a cast of twelve main actors, the film’s form is partly inspired by David Cronenberg’s ‘body horror’ and American television dramas CSI, Dexter and Bones, where reality is perceived through a pornographic forensics of empirical and visceral phenomena.

The six episodes of the film will each be screened individually throughout the installation. As with Gilligan’s recent video works, the film’s episodic structure takes its cue from television and the medium’s ability to dispense its storyline in stages. This framework allows the films to be more easily distributed online. The individual film episodes will be available on the internet via a website dedicated to the project, which will launch with the Chisenhale exhibition and accompany further exhibitions in Cologne, Banff and Vancouver.

Melanie Gilligan was born in Toronto in 1979. She currently lives and works in London and New York. Gilligan completed a BA (Hons) Fine Art at Central Saint Martins in 2002 and was a Fellow with the Whitney Museum of American Art's Independent Study Programme in 2004-5. Recent exhibitions include: Transmission Gallery Glasgow (2008) as part of the Glasgow International Festival and Franco Soffiantino Gallery, Turin (2009). In 2008 Gilligan released Crisis in the Credit System, a four-part fictional mini drama about the recent financial crisis, made specifically for internet viewing and distribution, commissioned and produced by Artangel Interaction. She has recently completed a single screen film Self-capital (2009), commissioned by the Institute of Contemporary Arts London as part of the group exhibition ‘Talk Show’. In October 2009 Gilligan was the recipient of a Paul Hamlyn Award for Artists.