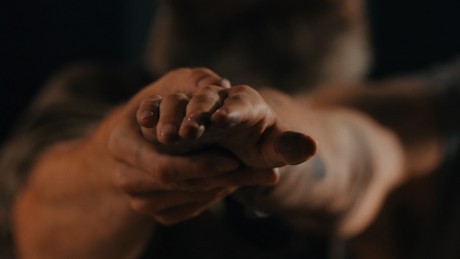 Rather than focusing on Tom of Finland’s work, Staff’s film evokes the foundation as a set of relations. He explores how a collection is formed and constituted; the communities that produce and are produced by a body of work; and ideas of intergenerational relationships and care. Through observational footage of the house, its collections and inhabitants, the foundation is revealed as a domestic environment, a libidinal space, archive, office and community centre; a private space which is also the home of a public-facing organisation and the source of a widely dispersed body of images.

Staff foregrounds his own identity and his personal dialogue with the different communities of the foundation to consider how ideas of intergenerational inheritance and exchange are complicated by gender identity and presentation; in this context, of a younger trans person within a context dominated by the overtly masculine, male identity of an older generation. The documentary footage of the foundation is intercut with a series of scenes, which are shot in a set incorporating aspects of the building’s architecture and technologies and operate within the register of experimental theatre. In these sequences, featuring his interactions with an older actor, Staff uses choreography and props to explore the body as a site for the construction and deconstruction of subjectivities.

Through a varied, interdisciplinary and often collaborative body of work comprising film, dance and performance, Staff considers ideas of discipline, dissent, labour and the queer body, frequently drawing on the historical narration of counter-culture, radical activity and alternative forms of community building. This new work is the product of several years’ research and dialogue with the Tom of Finland Foundation and is Staff’s most ambitious and large-scale project to date, bringing together languages of film and live performance with sculptural materiality to explore the body as a political, living archive. The Foundation explores the complexities of cultural artifacts and collective identities, via an examination of ownership, appropriation, responsibility and desire.

Following its premiere at Chisenhale Gallery there will be subsequent presentations of The Foundation at Spike Island, Bristol in July 2015, Institute of Modern Art, Brisbane in late 2015 and Contemporary Art Gallery, Vancouver in early 2016.

With thanks to the Tom of Finland Foundation.

The Foundation is supported by Arts Council England Grants for the Arts, The Elephant Trust and the Genesis Prize.