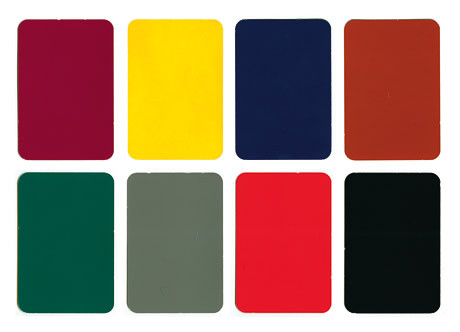 Chisenhale presents the first solo exhibition of Ulla von Brandenburg in the UK. Working with drawing, painting, textiles, film and installation von Brandenburg investigates historical socio-cultural practices including the occult, magic, early psychoanalysis and modernist theatre through a highly crafted system of objects and moving-image works.
In the gallery von Brandenburg presents a reconfiguration of her 16mm film installation 8 (2007), which consists of a maze-like structure of eight coloured fabric panels that the viewer must navigate before encountering a black and white film. The fabric panels refer to colour coding experiments developed by Dr. Max Lüscher, a Swiss psychologist who pioneered the study of the relationship between colour and personality. According to Lüscher’s theories, von Brandenberg’s selection should have a changing effect on the viewer dependent on their personality as they move through the work.
The installation plays with the visual contrast between these coloured architectural forms and the content of the black and white film, which depicts a slow steadycam single shot through the baroque rooms of the 17th century château de Chamarande in France. Each room plays host to a single character in a tableau vivant which, as well as conjuring images and characters and motifs in von Brandenburg’s past work, make oblique references to works of theatre, painting and literature such as the prints and paintings of Edvard Munch, August Strindberg’s The Father and Anton Chekov’s Uncle Vanya.
Accompanying 8 von Brandenburg will create a monochromatic wall painting of a forest specially conceived for the Gallery’s entrance space. Covering the entire surface area of the room this installation provides an intense introduction to the psychologically charged atmosphere of the main exhibition hall.
Ulla von Brandenburg (born Karlsruhe 1974, lives and works in Paris) has recently shown in the 2nd Turin Triennale (2008) and will be presenting in the main exhibition at the forthcoming Venice Biennale (2009) and a solo show at Le Plateau/FRAC Iles-de-France (2009). Previous solo shows include CCA, Wattis Institute for Contemporary Art, San Francisco (2008); Irish Museum of Modern Art, Dublin (2008); Kunsthalle, Zürich (2006) and Palais de Tokyo, Paris (2006).
www.chisenhale.org.uk