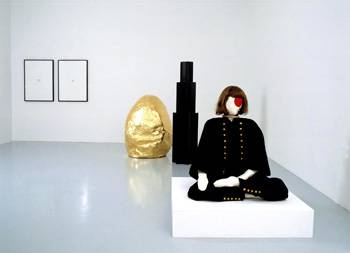 Solid Objects will divide Chisenhale Gallery's concrete space and will set their recent sculptural works against the work of the other, creating a dialogue to investigate areas that shift between intimacy and opposition.

Mai-Thu Perret will present part of her series of sculptures entitled The Crystal Frontier. A series that comprises text and objects, which she describes as either the hypothetical production of a group of women living in autarchy in the desert of New Mexico, or the materialisation of the principles that shape their everyday life.

She investigates our relationships to common objects found in contemporary art, design spaces and shops, such as Ikea or Habitat - whose revolutionary origins and aspirations have often been forgotten, engaging with the consequences and changing realities of utopian thinking as it becomes incorporated into capitalism’s mainstream.

In contrast, Valentin Carron investigates the anti-revolutionary imagery of the vernacular – a nationalist aesthetic developed at the end of the nineteenth century – which looked to the past rather than the increasingly industrial future, and whose style and form still influences modernism and contemporary life.

He often reproduces, often at a one-to-one scale, historically and politically ambiguous objects and monuments. This practice does not erase the intention of the original, but underlines its complex symbolism and questions the construction of tradition and identity in our era of globalisation.


Mai-Thu Perret was born in 1976 in Geneva. She lives and works between Geneva and Berlin. She studied at Cambridge University and the Whitney Independent Study Program, New York. Solo shows include: Galerie Francesca Pia, Bern; Galerie Barbara Weiss, Berlin; Statements, Art Basel; Centre d’édition contemporaine, Genève; The Modern Institute, Glasgow; Glassbox, Paris. She will have a solo show at The Rennaisance Society, Chicago, later this year.

The exhibition has been supported by: The Henry Moore Foundation, Pro Helvetia, Arts Council England and Air Design
www.chisenhale.org.uk