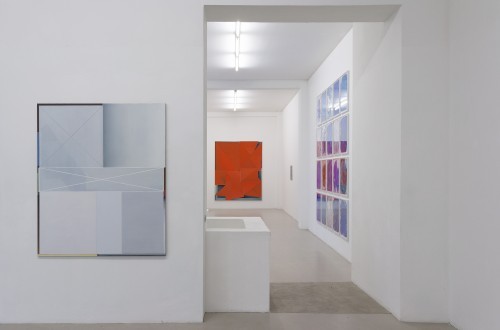 We are pleased to invite you to the opening of "KANTE", a dialogue exhibition of Enrico Bach and Franziska Holstein curated by Anne Kathrin Wegner.

Enrico Bach's often large-scale works mix elements from more classical abstract and constructive painting with a very contemporary cosmos of media images, creating graphical user interfaces of technologized, everyday life with the blocky "style" of graffiti culture. Abstract lines, bars and planes are assembled into illusionistic spaces, correlating to form three-dimensional bodies. Yet Bach denies entrance through shifting color planes; The different layers and light sources within the image flashing intense cold and warm contrast reminiscent of computer errors, different vanishing points and atmospheric transitions generate an air of instability. Testing formal solutions through his small-scale works, one becomes literally part of the image in the larger paintings. With a dosed, picturesque ductus, Bach sets hard edges, wide lines and sharp surfaces against cloudy and blurred parts, emphasizing the volatility of the canvas with the visible traces of the painting process. Bach undermines the illusion of a single image space and the spontaneity and randomness of the painting process and his associative openness counteracts the geometric constructivist rigor.

Franziska Holstein shows excerpts of two new series of painting and collage on paper, presented framed in two large blocks. The geometric shapes in Holstein's new works on paper remain only in the shapes of the paper she uses: Rectanglular or circular cut-outs are mounted to the paper, with the outlines painted over. Combining painting and collage, the works appear at first glance to neglect Holstein's otherwise highly regulated working system: In broad, strong and spontaneous gestural brushstrokes, transparent or pastose color is applied over the painted backgrounds. The only recurring compositional elements are these equally sized papers, underscoring the serial aspect of her work. The joy about the emotional potential of the color, often combining two colors, about different strike directions, about abstraction and chance is apparent. With incredible ease and picturesque expressivity these works are sensuous and lyrical despite their strict reduction. Whereas Holstein avoided to make pictorial gestures in earlier canvases, she has now examined these aspects with acrylic paint on paper.
By combining different techniques both artists succeed in bridging the gap between formal strict rules and playful twistings.

Enrico Bach was Born in Leipzig in 1980. He attended Staatlichen Akademie der Bildenden Künste Karlsruhe from 2005 to 2010 and was Student with Anselm Reyle, Olaf Holzapfel, Jonas Burgert and Gustav Kluge. From 2010 to 2011 he was Meisterschüler of Prof. Gustav Kluge. Recent shows include Heidelberger Kunstverein, Kunstverein Pforzheim, Badischer Kunstverein and sp-arte, Sao Paolo. Grants include Graduiertenstipendium des Landes Baden-Württemberg and Arbeitsstipendium Stiftung Kunstfonds Bonn. He was awarded with the “Forumkunst” art prize in 2012. Bach lives and works in Karlsruhe.

Franziska Holstein was born in Leipzig in 1978. She attended the Leipzig Academy of Visual Arts, studying from 2000 to 2005 under Arno Rink. From 2005 to 2008 she was a Meisterschüler of Neo Rauch. In 2011, she held a grant from the Konrad-Adenauer Foundation. In 2012, she was attending the residency program in Colombus / Ohio followed by a 6 month residency at the Cité Internationale des Arts in Paris. She was awarded with the Artprice of the Sachsen-Bank 2012 including a solo exhibition at the Leipzig Museum der Bildenden Künste.
www.christianehrentraut.com