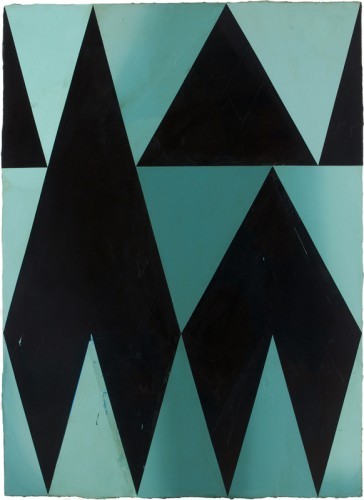 We are pleased to invite you to „Kombi“, Franziska Holstein's second solo exhibition at Galerie Christian Ehrentraut, on Friday, March 23rd.

In the three groups of works on view, Holstein develops a complex body of rules and standards to organize simple geometric forms to complex systems.
In her paintings, silkscreens are applied to the grounded canvas only to be covered up with minimalist geometric patterns in numerous layers of thick paint. By shifting, correcting, re-combining and overpainting single elements over and over again, she builds up a rich relief with well directed fractions of the image surface that bear witness to the process of development.
A series of 27 coarsely gridded hand-offset-prints cut up representational motifs (recognizable fragments of sting, fur and bristle) and re-assemble to an „anti-jigsaw“ of specific division ratios.
A large series of colored paper-collages is created by means of a binary system that exercises all possible variations of a given graphic motive and renounce any figurative representation.
Progressing repetitive patterns and ratios of concrete forms, Holsteins works initially seem minimal and distant. After closer inspection, however, one traces the organic development of "trial and error" and rich texture.

A catalogue accompanying the exhibition is published by LUBOK.

Franziska Holstein was born in Leipzig in 1978. She attended the Leipzig Academy of Visual Arts, studying from 2000 to 2005 under Prof. Arno Rink. From 2005 to 2008 she was a Meisterschüler of Prof. Neo Rauch. In 2011, she held a grant from the Konrad-Adenauer Foundation where she presented a joint exhibition with Robert Seidel in December 2011. In April 2012, she will be attending a 3 month residency program in Colombus / Ohio by the Greater Columbus Arts Council (GCAC) and the Ministry for Science and Art of the State of Saxony followed by a 6 month residency at the Cité Internationale des Arts in Paris.
www.christianehrentraut.com