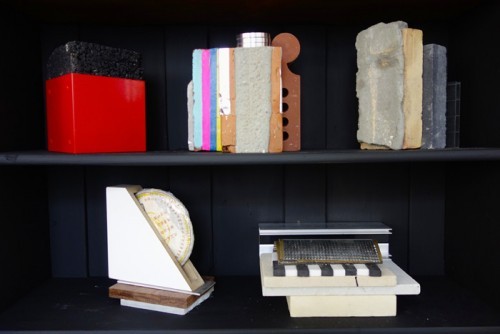 We are pleased to invite you to the private viewing of "RECOGNIZE SET IN FREE EDGE", a joint exhibition by Yudi Noor and Marisa Favretto.

The three sculptural installations and the paintings are examining materiality, testing principles of order and designing new worldviews. The works of the two artists are clearly defined, but deeply woven into each other, and take on elements of one another. In dialogue, both artists exchange ideas on their respective cultural backgrounds and with their own artistic means:

Yudi Noor was born in Bandung, Indonesia in 1971. He studied at the Akademi Seni Lupa in Indonesia and at the UDK Berlin. From January through March 2013, he was artist in residence in Dubai with a grant from Dubai Culture, Art Dubai, Tashkeel and the Delfina Foundation. Later this year, he was artist in residence at the Al Riwaq Art Space in Manama, Bahrain. Yudi Noor lives and works in Berlin. His installations combine meticulous craftsmanship with readymade architectural sample material and religious and philosophical concepts. Although composed intuitively, in the course of the work the characteristics of each material, it's origins and original use in secular or sacred contexts determine it's place in the artworks.

Marisa Favretto was born in Alaska in 1974. She studied in Oregon, USA and Florence, Italy and graduated from Goldsmiths College in London. The motifs of her paintings on linen and canvas are close to the limit of the perceptible but reference subtle characteristics of natural formations by the way she is applying the color. She is dyeing the cloth rather than painting it, then she draws on it and makes it protrude into the room or blend into the wall. Favretto experiments with the perception of images and with the image space of front-, middle and background. Setting specific rules upon her paintings, she tries new arrangements to override conventional seeing habits. Marisa Favretto lives and works in Berlin.
www.christianehrentraut.com