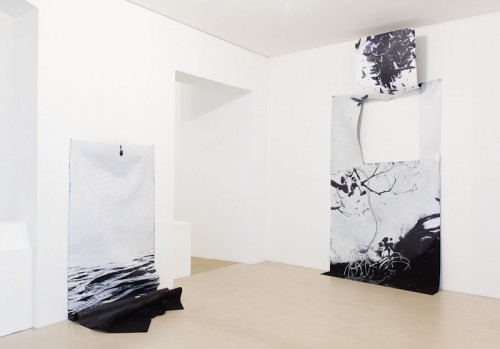 In „Aequator“, a new series of nine large works on felt, Kaufmann further investigates the idea of painting-installations combining sculpture with painting.
Painted in acrylics on black felt, the imagery emerges from stark black and white contrast. The glare of theater lighting raises archetypical anti-heroes from monochromatic black backgrounds, shaded interiors and labyrinth-like landscapes.
Von Kaufmann's paintings hover between the polarities of light and shadow and good and evil. To increase the dramaturgy of his paintings, he violently compromises the integrity of the picture plane: The paint felt surfaces are cut, warped and are folded into multiple picture planes, like theater backdrops. Planes protrude and give way to new angles and points of view. While some parts of the composition descend into the distortions of perspective and foreshortening, others rise to clarity as the viewer moves around the painting. The works encompass both painting and drawing, sculpture and installation. They span ceilings and walls, entangle and enthrall the viewer, and then languidly roll onto the floor.

A second part of the exhibition will be shown in January 2011 at the Uziyel Family Collection in London. We will be happy to keep you posted.

Ruprecht von Kaufmann was born 1974 in Munich. He studied painting at the Art Center College in Los Angeles. He lived in Los Angeles and New York for several years, moved to Berlin in 2003, where he currently lives and works. His works have been exhibited at numerous venues including the Fraktale IV exhibition at Palast der Republik, Berlin (2005), Kunsthalle Mannheim (2006) and Konrad Adenauer Stiftung, Berlin (2007). Currently, von Kaufmann holds the Erwine Steinblum grant of the Stiftung Syltquelle and KIT Duesseldorf.
www.christianehrentraut.com