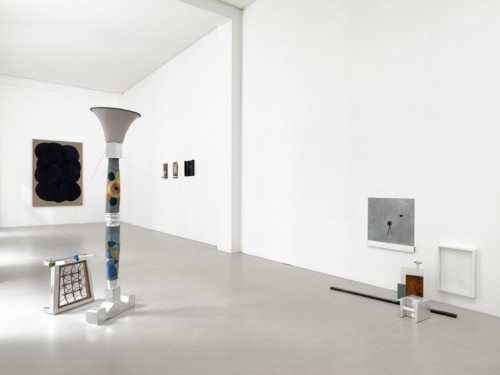 We are pleased to invite you to the private viewing of Yudi Noor's exhibition "Accumulation and the Hereafter Perception".

Yudi Noor's second solo exhibition at the gallery features new assemblage-pieces, sculptures and embroideries that merge mysticism with minimalism and pop-culture in a seemingly playful way. As diverse as the materials he collects and that are used for his objects, images and texts, are the conceptual, spiritual and social references within the work. Architectural material samples and industrially produced iridescent films are part of the works as well as a massive tree root from Indonesia and the discarded speaker of a minaret.
Although composed associatively in the beginning, in the course of the work the characteristics of each material, the origin and original use in secular or sacred contexts more and more determine their place in Noor's works.

Yudi Noor was born in Bandung, Indonesia in 1971. He attended Akademi Seni Lupa, Indonesia and the Berlin University of the Arts. Yudi Noor lives and works in Berlin.
www.christianehrentraut.com