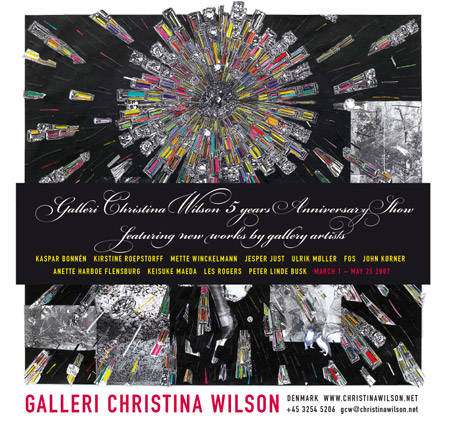 Galleri Christina Wilson is celebrating its fifth anniversary, so what could be more appropriate than a group exhibition with the gallery's artists, all of whom have created new works especially for the occasion.

Since the gallery opened ...
The gallery opened in a former industrial building on the Islands Brygge quay on 1 March 2002, with a major solo exhibition by Danish artist Kirstine Roepstorff. The gallery was located in 250 sq.m. of bright, newly-renovated premises, and Roepstorff's exhibition was a great success, with works sold to both museums and private collectors, and good press coverage. It was clear that both the artistic world and the public gave the new gallery a warm welcome.
Over the past five years we have held extensive separate exhibitions for each of the gallery's artists, while at the same time organising a number of group presentations. At least once a year we have used the gallery as a kind of art hall, giving presentations of foreign artists in various group exhibitions such as Playschool, New Figuration, Frisky Flaming Hot and With Peppermint You Are My Prince. All of these exhibitions have presented both well-known and new international names, while helping to bring new dynamics and vitality to the Danish art scene.

The gallery in an international context ...
Since its opening in 2002, the gallery has participated in three or four foreign art fairs every year, in Turin, Berlin, Brussels, London, Basel and Miami, which has provided both the gallery and the artists with a very broad range of contacts. As a result, all of the gallery's artists have been in great demand abroad among collectors, museums and galleries.

Future prospects ...
The fifth anniversary celebrations also provide a welcome opportunity to look back and review the work of the gallery. As some of you already know, Christina Wilson is expecting a baby, which means that Sara Krogsgaard will be looking after the day-to-day management of the gallery for a time. Christina will however still be present and will visit the gallery daily. At the same time, we intend to use the coming year to renew and redefine the gallery's profile. That means that we will be entering into collaboration with a number of new, exciting artists, starting with the group exhibition Blackberrying this summer, where we will be exhibiting art within more or less all media, including works by Ryan Gander, Amie Dickie, Sara Van Der Beek, Lasse Ernlund Lorentzen, Garth Weiser, Craig Mulholland and Eileen Quinlan.

We are moreover looking forward to our continued participation in the art fairs of London, Basel and Miami, but also to exploring new markets where we can present the artists we exhibit at the gallery.

We are greatly looking forward to all the new things that will be happening, and to welcoming you all both now and in the future!
Yours sincerely,
Christina Wilson, staff and artists.

Newsletter:
Kaspar Bonnén will be exhibiting from 15 April at the JF Willumsen Museum in Frederikssund, where he has created a number of large sculptures which interact with and challenge Willumsen. Bonnén recently sold a number of large paintings to Sammlung Essl in Vienna, and this summer he will be exhibiting new works at Patricia Low Contemporary in Gstaad, Switzerland, together with John Kørner and Kirstine Roepstorff. Bonnén is one of two artists chosen by the Danish National Bank to enhance the design of the new Danish banknotes. Bonnén has created a fantastic, good-humoured and innovative series which successfully combines both tradition and renewal.
See also: www.nationalbanken.dk/DNDK/money.nsf/side/Idoplaeg_til_ny_dansk_seddelserie!OpenDocument

Kirstine Roepstorff's collages are not often seen in Denmark, but this year Roepstorff will be exhibiting at ARoS in Aarhus, as well as at Esbjerg Art Museum. She will also be participating in many group exhibitions abroad, including at the Monica De Cardenas Gallery in Milan, ZKM in Karlsruhe and Kunstfabrik in Berlin. Roepstorff will also be taking part in the third Prague Biennale, in the project FuckOffMachoPainterScum. Roepstorff is represented by Gallery Peres Projects in Berlin and Los Angeles, and her works hang in a wide range of national and international collections, including the Rothschild Foundation Collection of Contemporary Drawings, Museum of Modern Art, New York, the Dakis Joannou Collection in Athens, Statens Museum for Kunst in Copenhagen, the West Sealand Museum of Contemporary Art and the Saatchi Collection in London.

Mette Winckelmann has been attached to the gallery since she graduated from the art academy in 2003. In December we gave a major solo presentation of her works at NADA Art Fair in Miami. The works were well received and were located in large private collections in New York, Los Angeles and Texas, respectively.

Winckelmann is now working on a major decorative project for the Royal Veterinary and Agricultural University's nine new buildings in Tåstrup – a task she has been assigned by the Danish Arts Foundation. In co-operation with the gallery, and in response to strong international demand, Mette Winckelmann will shortly be publishing an extensive catalogue documenting her works.

The anniversary exhibition will feature a world premiere of Jesper Just's latest video work, produced in co-operation with Witte de With in Rotterdam, S.M.A.K, in Ghent, Kunsthalle Wien and the Ursula Blickle Foundation in Karlsruhe. An extensive catalogue of Just's works has been produced in this connection. The large monumental work by Just shown in the gallery last autumn, It Will All End In Tears, has been acquired by the Louisiana Museum of Modern Art and will be presented there in the spring. It Will All End In Tears will also be shown together with the new work at all the above-mentioned institutions, as well as at the Tate Liverpool later in the year. In 2006, Jesper Just held solo exhibitions at, amongst other places, the Hirshhorn Museum, Washington, the Hammer Museum, Los Angeles, and Moderna Museet in Stockholm. In Denmark, his works have been acquired by the Herning Art Museum, Statens Museum for Kunst, Arken and Aros. Just is moreover represented at a wide range of foreign museums and private collections, including the Tate Modern, London, FRAC (Fonds Régional D ́Art Contemporain Champagne-Ardenne), France, MUSAC, Spain, the Carnegie Museum of Art, USA, Honart Museum, Iran, Sammlung Julia Stoschek, Germany, Castello di Rivoli, Italy, Arario Gallery, Korea, Malmö Konstmuseum, Sweden and Musée d’Art Moderne, Luxembourg.

In 2006, Ulrik Møller held two large, retrospective exhibitions at Skovgård Museum in Viborg, and is currently exhibiting at Nivaagaard Museum. A comprehensive catalogue has been published in connection with the exhibitions, which have brought Møller a new large Danish audience. Ulrik Møller's works have moreover attracted great attention at international art fairs; the interest has been particularly strong in the USA and Britain, which has resulted in long waiting lists for Møller's paintings. In April 2007, Ulrik Møller held a solo exhibition at Hales Gallery in London.

This year, FOS is taking part in the major Basel fair with an Art Statement, i.e. a solo presentation, for which FOS's British gallery, the Max Wigram Gallery, London, will be responsible. In 2006 FOS created an impressive project at Badischer Kunstverein in Karlsruhe. In Denmark, FOS is known for his Social Design projects, including the thorough redesign of The Men's Home on Istedgade in Copenhagen. FOS is also currently decorating the Danish National School of Theatre. FOS is represented at Statens Museum for Kunst and Arken.

Over the past five years, John Kørner has achieved considerable international recognition. John Kørner is represented in large international collections such as the Rubell Family Collection in Miami and the Saatchi Collection in London, as well as at a wide range of Danish art museums, including ARoS, Herning Art Museum, Statens Museum for Kunst and Arken. In 2005 he gave a solo presentation at the prestigious Art Statements in Basel, and in the following year he held two major, critically-acclaimed solo exhibitions at ARoS in Aarhus and the Victoria Miro Gallery in London, respectively. In 2007, John Kørner will amongst other things be responsible for the decoration of the new Copenhagen Playhouse.

Anette Harboe Flensburg is currently engaged in a major decoration project for the Danish Supreme Court, with several exhibitions coming up in Sweden and Denmark. In 2006, Flensburg presented a large solo exhibition at Trapholt in Kolding, and took part in a group exhibition entitled Skønhedspletter (Beauty Spots) at Brandts Klædefabrik in Odense.

Keisuke Maeda is a new Japanese artist with whom the gallery has begun to co-operate. Keisuke Maeda held his first one-man exhibition in the gallery in January 2006. This consisted of a series of highly detailed oil paintings and drawings which in combination comprised a wall installation, and which dealt with questions of narrative, stories and their relationship to time and recollection. Keisuke Maeda is represented by Hiromi Yoshi in Tokyo, and in the course of the spring he will be exhibiting at Galerie Diana Stigter in Amsterdam.

Peter Linde Busk held his first solo exhibition in the gallery in the autumn of 2006, at which he presented the series of paintings which comprised his graduation showing at the Slade School of Fine Art in London, and for which he had received the highest distinction. The exhibition in the gallery was very well received, and it will be exciting to see how Peter Linde Busk develops over the coming years, when he will be taking his postgraduate degree at the prestigious Royal Academy of Fine Arts in London.

Stylistically, Les Rogers' works span from the photorealistic to the abstract, often combined in layers in individual works, thereby creating a highly dynamic expression. Les Rogers held a solo exhibition at the gallery in 2003, and has exhibited at many venues across the USA and Europe, most recently at the Suzanne Tarasieve Gallery in Paris and the Karlheinz Meyer Gallery in Karlsruhe. Les Rogers will be participating with his American gallery, Leo König, at the Armory art fair in New York, for which he has produced a large sculpture.
www.christinawilson.net