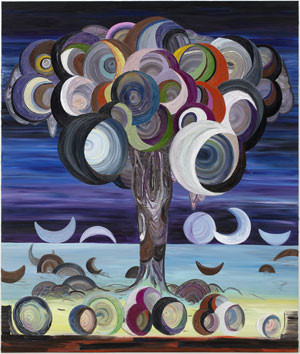 It gives us great pleasure to be able to present the gallery's second solo exhibition by the Danish artist Fie Norsker (b. 1974). In this exhibition, Fie Norsker will be showing a series of new paintings which express the spirit of the new Danish painting of the past decade. These are self-conscious works of great strength, powerful brush strokes and colours that continuously form sharp juxtapositions.

Norsker's pictures are structured around a classic landscape space such as we know it from the old Dutch masters, who constructed their works on the basis of a colour perspective, with a foreground, middle distance and background. Norsker's paintings feature similarly large and atmospheric spaces, but in quite unclassical shades of pink, purple and blue that fade into one another. Other paintings are dark as night and sparkling, and the presence of a space is dimly perceived.

Right out on the edge of the paintings' foreground, on the absolute surface of these spaces, we find figures, items, trees and ornaments, and we are drawn into a tale of magicians, the boy and his shadow, and trees in many colours.

Fie Norsker has long been interested in the ornamental, and this can clearly be seen in the new paintings, where the treetops have become large, juicy, colourful spheres that are repeated in other paintings, where they appear as bonnets, ball men with hats, turbans, half moons, stones and other variations on the circle.

As always, Norsker's works are full of energy and humour, and unorthodox in their choice of both motifs and colours. As a nod back to her earlier paintings, we re-encounter here the penis motif. Whereas in some of her earlier paintings the penis was built up from small mosaic-like strokes, here it is constructed from ornamental half-circles, or moons, if you like. In this way, Fie Norsker challenges both the phallus as motif, and painting itself, as the bearer of traditional masculine qualities.

Fie Norsker is one of today's most powerful painters, challenging with great energy and a devil-may-care attitude the conventions of painting with regard to both style and content. Fie Norsker was nominated for the Carnegie Art Award in 2008.
www.christinawilson.net