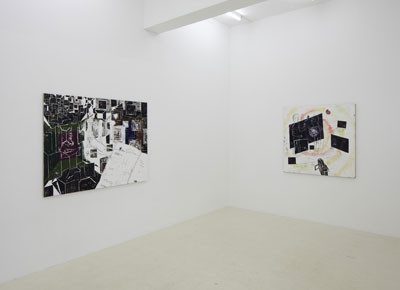 It is a great pleasure to be able to present Kaspar Bonnén's fourth one-man exhibition at the gallery, this time at the new premises on Esplanaden. The exhibition includes a wide range of new paintings which revolve around such themes as self-presentation, self-absorption and the media's exploitation of this human weakness. The motifs deal with the film medium and the many opportunities that individuals have to exhibit themselves and to be constantly on show.

Whereas Kaspar Bonnén has previously painted empty rooms with large colour surfaces that penetrate into each other, these new paintings possess a more graphic expression. The draughtsmanship is immediate and striking, and the works have been kept to a more monochromatic scale, occasionally interrupted by violent outbursts of colour. Elements such as spotlights and cameras that are seen painted in private surroundings give the viewer the feeling of being totally exposed. Narrative is also important, for which reason several of the paintings exposit an almost cartoon-like story.

The narrative is about human life: human beings in the media, and the human urge to tell stories, make love and feel emotions. Many of the words that drift around in the pictures are the beginnings of acts, notions of plots, and the desire to evoke emotions. The words may refer to the many choices available to the individual: temptation, consumption and entertainment are contrasted with consideration, contemplation and reduced self-centredness. The exhibition's title, The Script, can therefore refer both to an actual film script, and to some kind of guide to or map of the challenges that the modern individual encounters on its way.

Kaspar Bonnén is currently holding an extensive solo exhibition at Brandts in Odense, Denmark, and he has also participated in several recent group exhibitions, including at Rønnebæksholm, Statens Museum for Kunst, KØS Museum of Art in Public Places, and ARoS Aarhus Kunstmuseum. Kaspar Bonnén was among the artists selected to decorate Frederick VIII's mansion, the future home of the Crown Prince and Princess, at Amalienborg Palace.

It is also a great pleasure to be able to present Troels Sandegårds exhibition in the project room of the gallery, to celebrate the artist’s catalogue for his recent solo show The Massive Void at Esbjerg Museum, which has just come out. The show consists of photograms and an installation of a limited edition of the book, which is vacuum packed with a petri dish and spores collected at the artist's show at Esbjerg Kunstmuseum.
Rather than creating autonomous works of art, Sandegård constructs mechanisms that use the same oxygen, water and light that we do. Sandegård's works always describe a gradual progression from familiar functionality to an unknown, incomprehensible function that seems to aim most of all at the generation of form. In the works of Troels Sandegård, the process that gives form to the object is much more important than the finished object, and the process itself is critical, enigmatic and pictorial.
www.christinawilson.net