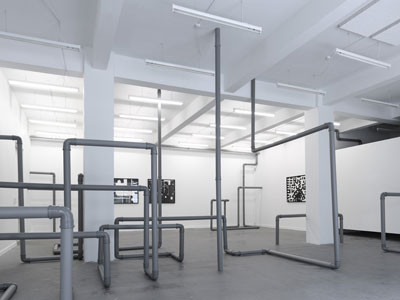 It is with great pleasure that we present the Swedish artist Magnus Thierfelder's (*1976) first solo exhibition in Denmark. The exhibition consists of installational interventions in the gallery space and of a number of drawings in which Thierfelder continues his exploration of the relationship between the observer, the space and conventional orders and systems.
Magnus Thierfelder's installation of grey drainpipes resembles a three-dimensional version of the classic screen saver in Windows, in which an eternally growing pipe system tries to find space for itself by continually twisting and turning in relation to the screen space and its own body. In the same way, Magnus Thierfelder's installation grows out of the gallery space and relates to the surrounding space and its own continual growth. The installation forms a picture of a system which is already embedded in the gallery space - a picture which at the same time reveals a subtle and complex harmony between space, system and the people moving around in the room.
Like Bruce Nauman, Magnus Thierfelder works with language and experience, but whereas Nauman's works are often raw and unpolished, indicating an interest in process-oriented art, Thierfelder takes a different approach. Formally, his works represent a continuation of minimalism, inasmuch as he often works in sculpture and expresses himself with the help of very simple forms, often industrially produced, which form part of serial sequences. In style and content, Thierfelder uses a reductionist method; he takes his starting-point in something that is recognisable, even familiar, but the objects he uses and the motifs he draws are transferred from one context to another, or simplified in a way which causes the observer to lose his bearings to a certain extent and experience a high degree of self-awareness.
Magnus Thierfelder works semantically in the subtraction process: he analyses the referential relationship between the statement and the world, and focuses on the formation of meaning and the relationship between meaning and personal experience. It is as though there is something missing in Thierfelder's works, which we, as observers, must ourselves supply in our attempts to actively create structure and meaning. Thierfelder's works reveal how we are surrounded by both visible and invisible systems or orders, which help to shape our daily lives and inform how we relate to our surroundings. These are systems over which we can never establish control, or for that matter a clear picture, but which we are nonetheless expected to relate to and handle. The works focus on our psychological gestaltification of material reality, and Magnus Thierfelder points out how our relationship with our surroundings does not arise from purely sensory impressions, but rather through the intercession of both imaginary and symbolic structures.
www.christinawilson.net