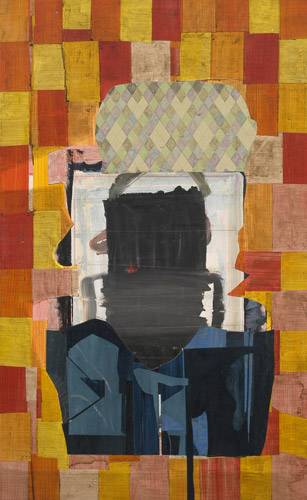 PETER LINDE BUSK
"Come at the King You best not Miss"

Galleri Christina Wilson hereby has the pleasure of presenting the first one-man exhibition in Denmark by Danish-born artist Peter Linde Busk (*1974). Busk graduated from the Slade School of Fine Art, London, in 2006 and is currently taking a postgraduate degree at the Royal Academy of Fine Arts in London. The exhibition in the gallery is partly a reinstallation of Peter Linde Busk's 2006 graduation project from Slade, Hail to the Failed, which received the jury's highest commendation.
The exhibition consists of a number of paintings and collages, as well as five painted panels which virtually create a scenery in the gallery space.
Come at the King You best not Miss is actually a quote from the American police series The Wire, but in the exhibition situation, it becomes a reference to the strong tradition of painting, as well as to the artist's personal performance and fear of possible failure.
Peter Linde Busk's work often relates to anti-heroes or tragic figures who fail in one way or another, including such fictional characters as Raskolnikov, Lykkeper, Don Quixote and Hamlet. Another tragic and paradoxical figure to whom Busk refers is the King of Hearts, traditionally depicted on playing cards holding a sword behind his head, which has given rise to the nickname the Suicide King.
In his fascination with the deviant and the marginalized, Busk has also been inspired by the compassionate and often unsightly works produced by certain outsider artists with psychiatric problems, as well as by folk art and children's drawings. This is expressed in his manic, enthusiastic brush strokes, but also in the way he constructs an autonomous and unstable pictorial universe in which strong colours and awkward shapes are balanced.
www.christinawilson.net