To the Highest Mountain 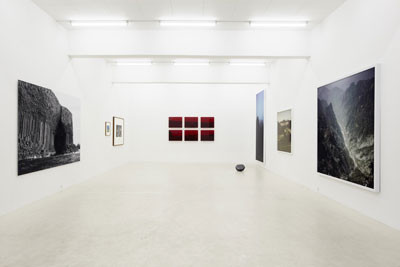 To the Highest Mountain, installation view
TO THE HIGHEST MOUNTAIN
19 November - 22 December

The mountain has often been employed as an artistic motif in painting, where the overwhelming size and often impassable nature of mountainous terrain has been explored and portrayed in innumerable variations. The works in the exhibition clearly demonstrate that the sublime is a concept which remains valid today as a means of characterising a work of art, with several of the works portraying in various ways the relationship between human beings and the disquieting and awe-inspiring nature of the mountain.

Darren Almond (UK) works with films, drawing, installations, sculpture and photography. His subjects vary, but reveal a general interest in time, movement and space. Since 1998, Almond has been photographing landscapes at full moon. The photographs are taken with an exposure time of up to 15 minutes, which causes the landscapes to appear bathed in a very special light. This technique transforms the landscapes, turning night into day, and bringing out details that would not be noticeable in normal daylight. The photographs are in the tradition of those romantic portraits of nature which document time and space with an intense preoccupation.

Hamish Fulton (UK) describes himself as a "walking artist": a designation that he uses to link a concept to his practice, which consists precisely of direct physical contact with nature and the landscapes through which he moves. His works of art arise through hikes through nature, and may be seen as documentation of his journeys, by way of which the observer can relive Fulton's struggles. The works in the exhibition are taken from Fulton's hike on Mount Everest in 2009, and their titles include the Tibetan name for the mountain: Chomolungma.

Amalia Pica (ARG) is showing the work Dialogue (Paper and Mountain), 2010, at the exhibition. Pica's work is quite subtle, consisting of a reproduction which has been enlarged to its current size using a photocopier. The work is thus an assemblage of black and white photocopies in A3 format which have been glued directly to the wall. The individual parts appear abstract, but in combination the subject emerges: a mountainside with a standing woman. She is shown holding a large piece of paper in her arms, lifting it up towards the mountainside in order to allow a dialogue to take place. The paper and the mountainside are the work's two main characters, which stand in marked contrast to each other in several respects, and in the meeting between them, these contradictions become evident.

The works of Ebbe Stub Wittrup (DK) take as their starting-point the cave and the island, as metaphors for isolation and for an exploration of the subject's inner mental spaces. The works – apart from a single object – consist of a series of photographs taken in and around Fingal's Cave in the islands of the Inner Hebrides, Scotland. Fingal's Cave depicts a naturally-created cavern which opens up like a dark portal. The cave, which is associated with many superstitions, has rectangular vertical columns and provides tangible evidence of the incredible creative power of nature. By recording the scene, the photographs give observers an opportunity to share in the sublime experience of an encounter with this mysterious place.

Philip Topolovac (DE) has often in his practice worked with mountains as theme and motif. Topolovac examines the cultural significance of mountains for human beings, including the impassable nature of mountains, which is nonetheless overcome by climbers, and their associations with superstition, or with romantic ideas. The work Mountains at the exhibition both conceals and reveals, in a highly direct manner, the ways in which a photograph can manipulate the viewer's perception of reality. The work consists of 81 slides, all of which are images of piles of gravel at construction sites in Berlin. But the viewer is deceived, as the pictures resemble mountains. Only occasionally is the true reality revealed by the tracks of construction machinery or signs of waste thrown around.

Ulrik Weck (DK) has constructed several mountains of wax for the exhibition. Far from providing an authentic reproduction of nature, the works instead overturn our normal perception of proportion, and hence our experience of this. Instead of standing and observing a mountain from a distance, gazing up at the massive mountainsides, the mountains are now presented in miniature, and we can look down upon them. The wax mountains may be regarded as physical objects which refer to the saying that "faith can move mountains". Candles play an important symbolic role in many religions; people light candles when they say prayers. The accumulated volume of wax problematises the relationship between the human need to believe in something and our rational thinking.
www.christinawilson.net