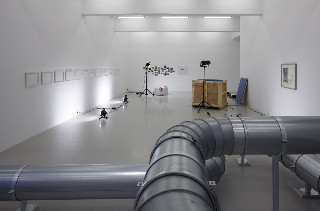 It is with great pleasure that Galleri Christina Wilson presents the second exhibition by Troels Sandegård (b. 1979) at the gallery.

Troels Sandegård is concerned with the forces of nature and physical phenomena, in both abstract and concrete form. A significant part of his oeuvre consists of machinery or installations that take their point of departure in that which surrounds us − usually by exposing phenomena that are either invisible or too powerful for us humans to be able to inspect their core. However, Sandegård allows us to do this by recreating these phenomena in a controlled environment, within their own universe.

Troels Sandegård’s working process may closely resemble that of an engineer or scientist, but the difference lies in the fact that the study is artistically based, and is not intended to result in a machine with a particular function, or a scientific investigation. The American artist Bruce Nauman is known amongst other things for his work "The True Artist Helps the World by Revealing Mystic Truths" (1967), and this iconic title, from a work by one of Troels Sandegård's most respected colleagues, is an excellent description of Sandegård's own working process, despite the fact that the two artists' approach to their works is otherwise entirely different.

The starting-point of "A parallel myth of the death of the Greek giant Typhoon and other interpretations of Vortex" is one of nature's most powerful forces, namely hurricanes. The subject is highly topical, and the phenomenon is an uncontrollable one which has fascinated and terrified human beings since ancient times and right up until the present day, exemplified by the hunt by the famous Belgian contemporary artist Francis Alÿs for the eye of the hurricane. In very different ways, Troels Sandegård has created two original physical interpretations of the hurricane for his exhibition at the gallery. One of these is a miniature hurricane, consisting of steam being hurled around in a box, while the other is a large pipe system that rotates on its own axis, while a wind as powerful as a hurricane (32 m/s) is blown through the system.

Using such diverse media as installation, photography, print, video, drawing and sculpture, Troels Sandegård takes the observer on a journey into the fascinating universe of the storm, as seen through from the original and distinctive point of view of the artist.
www.christinawilson.net