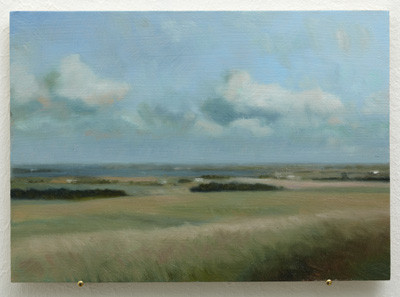 Galleri Christina Wilson is proud to be able to present a number of new works by Ulrik Møller under the title 'Kraftwerk'. The works in the exhibition focus on the power and energy discharged in artistic production.

Where Ulrik Møller's previous works have previously been marked by a certain thoughtfulness and melancholy, the idiom world of Kraftwerk has expanded to encompass new motifs. In their various ways, the works in the exhibition explore the quiet creative power of nature, as contrasted with man-made machines such as ferries, power plants and rockets. Several of the paintings reveal Ulrik Møller's fascination with machines and his former background as a mechanical engineer.

Ulrik Møller's paintings follow the tradition of Golden Age landscapes, but whereas Golden Age paintings come with heavy connotational baggage, in Kraftwerk we are directly confronted with Møller's uninhabited world. Kraftwerk reveals a new side of Ulrik Møller's artistic production. The spontaneity behind the works gives them a more sketch-like character, thereby imbuing them with a new form of life. This is clearly evident in the small paintings on wooden panels, which have a light and unimpeded character, as well as being precise and highly atmospheric.

Ulrik Møller uses photography as the starting-point for his paintings, and this direct form of representation has accompanied him throughout his artistic production. For this exhibition, Ulrik Møller has gone a step further and has created the video works Seascape and Ferry. Here he brings to life his previously utilised motif of the ferry, and for the first time we obtain an unfiltered glimpse of the world from which Ulrik Møller draws his inspiration. Through the video works, we are directly confronted with the initial stage of Møller's paintings, which demonstrates that his paintings are impressions of an accessible reality.

The ferry trip is a recurrent theme for Ulrik Møller, and the water crossing can be seen as a cleansing process, and as a journey towards a sublime expression. The motif of the ferry thereby becomes an image of the transition between the real world and the purified expression that Ulrik Møller calls forth in his painting.