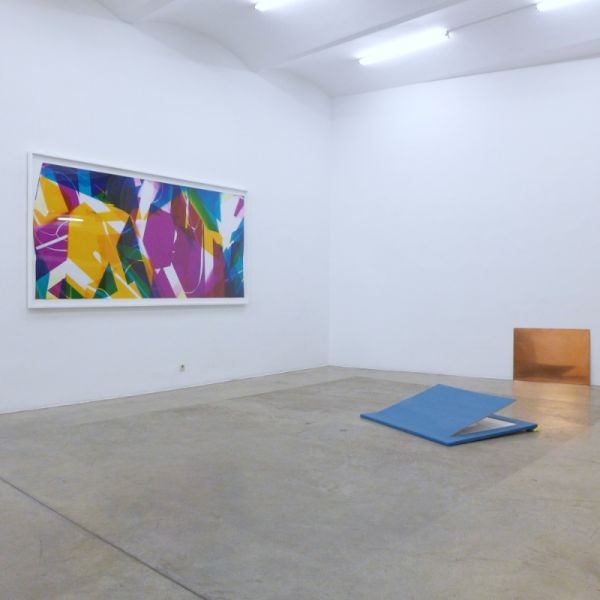 BLACK MAGIC, the title of the exhibit, refers on the one hand to the name of the well-known, fluid photo emulsion which enables light-sensitive photographic coatings to be permanently applied to almost any surface. Yet more is involved: the idea of the alchemical transformation of a mundane material into an illuminated magical element that emancipates creativity from the equipment, and at the same time turns the products of the universe of technical images into inscribed surfaces of their own illusion and their own meaning.

Photography is generally viewed as an instrument-based form of art: the camera moves between the reality that is to be represented and the creative will of the photographer; the camera as a magical instrument which, by means of the exposure to light of photochemical paper and in cooperation between atelier and photo lab, delivers an image, defined by Kadrage and lighting situation, of that which is the case.

It therefore has to do with a cultural technology transmitted by media, which should allow the implementation of an artistic vision in a symbiotic merging of man and machine. Thereby, however, that myth of authenticity is subverted which ascribes to the artist an entelechial power, a power that forces the immediate unfolding beyond the constraints of Heidegger's 'enframing'. In his essay "The Devil's Arts", Max Dauthendey wrote, "Man is created in the image of God", and "the image of God cannot be captured by any human machine." There might be a connection with this technophobic thread, that there is also a long-standing avant- garde tradition of camera-free photography, at least since the photograms of Man Ray and Laszlo Moholy-Nagy: direct registering into the film material by means of scratching, multiple cross-fades, and exposure effects that enable the original - which has become precarious in the era of technical reproducibility - to rise again in another way. The eight artists who are represented in the exhibition BLACK MAGIC approach the camera-free aesthetic each in their own individual manner:

WALEAD BESHTY’s photo series 'Six-Sided Picture' appears at first glance like a succession of abstract paintings. The works were created, however, by light-sensitive and variously folded paper being exposed to sunlight. "The material is equally referent and object, negative like its substrate."The works of MARTA DJOURINA are mostly concerned with procedures of direct exposure and light drawings, with which she sometimes reverts to camera-like instruments. Her series 'Sol' uses the sun as a source of exposure, which focussed through a magnifying glass burns into the paper in the truest sense of the word.

RENATO LEOTTA, in contrast, employs the weak light of the moon for his time exposures. Due to the factor of delay, not only is a water movement depicted, but rather, superimpositions result. Not only is the motif reproduced in the abstract figurations, but also the passage of time.

GWENNETH BOELEN's work returns to the origins of photography. The cassette is an enlargement of the cover which was commonly used to store daguerrotypes: one of the earliest photographic processes, invented by Daguerre in the 1830s. The copper plate, which normally functions as an image carrier, is lifted off the frame and placed aside. The container becomes a receptacle for ideas, a receptacle within which these ideas are permanently sealed off.

BARBARA HAINZ investigates in her works the relationship between photography and recollection, the photographic image as medium of memory. Pictures are selected from her personal archive according to personal categories, then laid on top of one another and encased in wax. In this manner the concrete memories appear as if behind a veil, and are laid upon each other like a palimpsest, as matrices for a subconscious remembrance in a Freudian sense.

ALEXANDRA NAVRATIL's series 'Bitterfeld' consists of black epoxy reliefs which display the impressions of leaves, stones, branches, bark, berries, nuts and flowers. The organic material was collected around the Silbersee in Bitterfeld-Wolfen. This heavily chemically-polluted area in Germany resulted in the 1990s from years of contamination by the AGFA-ORWO-film factory and adjacent branches. The vegetation found there today still bears diluted traces of this earlier chemical exposure. The reliefs which result from a chemical reaction of a silver nitrate solution, oxygen, and light are over-sized, three-dimensional, photographic plates. With digital processing of images, the intention is to neutralise the original meanings and connotations.

The fact that OLIVIA COELN isolates the collected fragments of her pictures from their original settings means that they are first devalued and then reset. The history and provenance of the original site is passed on again in every transformation.

CHRISTOPH WEBER in his work subjects the view of the logic of the instrument, beginning with a 50mm lens - this focal distance corresponds to the range of vision of the eye. The work transmutes the viewing cone, invented in the Renaissance, into its media-hypostasized version: the 'viewing pyramid.'
www.christinekoeniggalerie.com