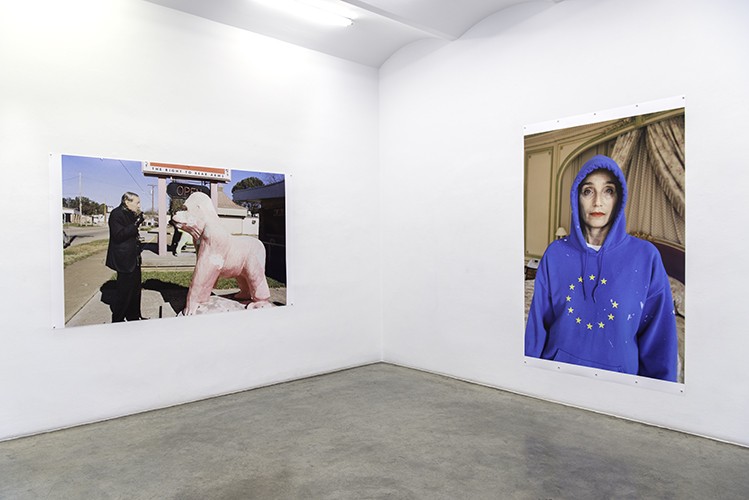 The tension in Juergen Teller’s works stems from the friction between the glamor, the shady appeal or the hermetic inaccessibility of a person / a situation / a landscape – in conjunction with the photographer’s weird, disillusioning staging strategies. In the resulting disenchantment new illusions are created, new existential layers emerge. His photographs in which film stars such as Charlotte Rampling or Beatrice Dalle are staged like figures in a tableau vivant and man and matter merge to form an ensemble – you could even say, in the words of Deleuze/Guattari, a body without organs – have long since become emblematic.

There is one piece in the exhibition that really stands out – the photograph of Kristin Scott Thomas who has become known playing roles of the elegant-soignée lady. Here she is wearing a blue hooded EU sweatshirt, which stands in striking contrast to her red-painted lips and, together with the helpless, frightened look on her face, makes her resemble an alien. As a stranger I arrived. As a stranger I shall leave.

In the photograph titled “More No. 13. Connecticut, USA 1999” Stephanie Seymour, dressed in a red robe with her breasts provocatively emerging and her head proudly raised, seems to be riding a lion (or the skin of one), clinging to the head of the beast. Here the decadent idea of the belle dame sans merci is given a contemporary metaphorical framing.

The “Sigmund Freud’s Couch” series, shot at the Freud Museum in London, uses the material substrate of psychoanalytic theory as a proscenium for model Malgosia Bela’s performance. She presents her naked body once in a lascivious-seductive pose, then cowering fearfully or posing in contortions in a pale Polaroid look.

Beautiful and horrific at once. Here you get the impression that a struggle is being staged between the agencies of Freud’s psychic apparatus as a body ballet of extremes: Where the ego once was, it must become.

Teller’s recent series from the Sultanate of Oman can also be read as relating, visually, to the implications of this mise-en-scène: vital energy and the death instinct. Here the great portraitist Juergen Teller completely discards the anthropomorphic dimension, showing instead stones, rock formations, textures of broken clayey ground, a cold shining sun, a raft burning in the dark. Landscape becomes a configuration off abstract signs carefully culled from the plethora. The Stills congealed to form decorative patterns or archaic symbols of a permanently permuting reality are like chthonic impulses from an existential space before and beyond our time. A photographic statement, if you like, of a sensual experience that seems to be nurtured by the reservoir of the unconscious. You could even say: material presence as the trace of a pre-conscious, a presumed animality. Juergen Teller’s work is about shedding light on the “intensity zones of the ecstatic” (Georges Bataille) and withstanding the appeal to the archaic. (Thomas Miessgang, January 2018)

Juergen Teller and his subjects seem to play out together the thrilling, obsessive, nervous-making drama of the wrestling of photographic access. They explore intimacies that are often startling in the extreme - but oddly comforting, too, in their sense of a shared, bodily vulnerability. Teller seems to bring to the intrusiveness and voyeurism of photography a naivete that is disarming, yet fully self- aware. This eager and almost infantile need to look and know and capture comes with a directness that also allows his subjects to feel the photographer's inevitable nervousness in bringing to them his compulsion to photograph. This transforms the inequality of the photographic exchange into a human encounter, mingling excitement and apprehension, turning the contingencies of fashion into the rigours and difficulty of art. This drama of access - at once ardent and impudent, exquisite and gross, excessive and refined - is played out most brilliantly in Teller's work with the British actress, Charlotte Rampling.

Mixed in with models and designers and actors, each legendary in his or her own way (or made legendary by Teller's camera), are family and friends, together with figures that inspire or intimidate, and landscapes and architectures that warm or chill the heart. (quot. Aveek Sen)
www.christinekoeniggalerie.com