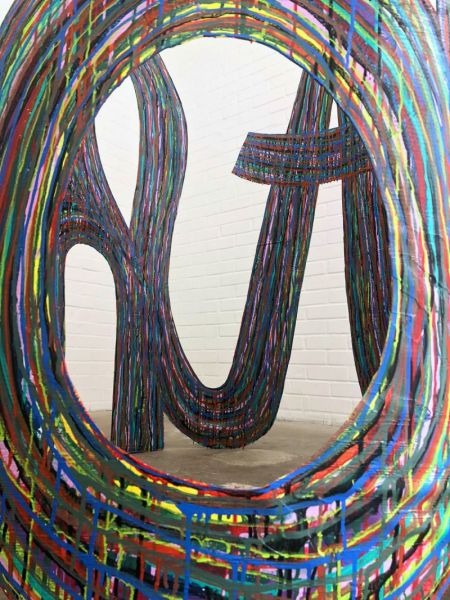 Everything is fluid. The space, the colour, the forms, the content, the associations, the artist, everything is governed by the Heraclitean aphorism. Accordingly, with the installation of the Austrian artist Manfred Peckl (*1968 in Wels), who lives and works in Berlin, KOENIG2 will be transformed into a world that inextricably unites Dream, Space, Reality and Desire. It is an artificially created projection of wild, all-devouring nature, yet nevertheless completely contrary to realistic or figurative approaches: Manfred Peckl thematises the two-, three- and multi-dimensional penetration of ideas and needs, using the medium of colour.

The point of origin and focus, as well as grounding inception, is the sculpture "earth", which also forms the title of the exhibition. The word entwined within itself opens up, without punctuation or labelling, multiple ways of reading which extend from "heart", via "the art", to nonsense-terms such as "thear". Arranged in a circle and covered with countless brushstrokes, the sculpture is at the same time performance podium, starting point of the artistic intervention, and embodiment of the planetary habitat. In the process, the ductus follows the letters which replicate the writing as it covers it. Stalactites hang down over this centre from a pink ceiling, whose fluid form is reinforced by vertically running stripes of colour. In their dynamic, the "Shapes" appear to be conceived in dissolution; subliminal processes of transience, beginning and end, and constant transformation resonate throughout.

The artist's works that are inscribed in the conventional rectangle also emerge according to the same process. They are precisely constructed out of industrial material - placards and posters from the public sphere - which are neatly filleted into equivalent, purely monochrome stripes and, collaged next to each other, suggest the impression of uniform brush widths. Thus sceneries from landscapes, seascapes and horizons appear, that purport to be related to painting or even to belong to it, although they should be classified as paper works, deriving as they do from an upcycling process. Painting, in its traditional hierarchic interpretation as the most noble discipline, is conceptually broadly stretched by Manfred Peckl, and is ultimately defined by means of an ecstatic process that allows the associative power of the viewer to enter into a dialogue with the emotional as well as intellectual conditions of art. The artist pursues this course himself in his performances, in that he interacts with the fluid forms and representations. The spoken, sung or shouted and physical confrontation with and within his installation engenders an additional level which emphasises the absurd immediacy of his artificial world in proportion to the radically changing environment.