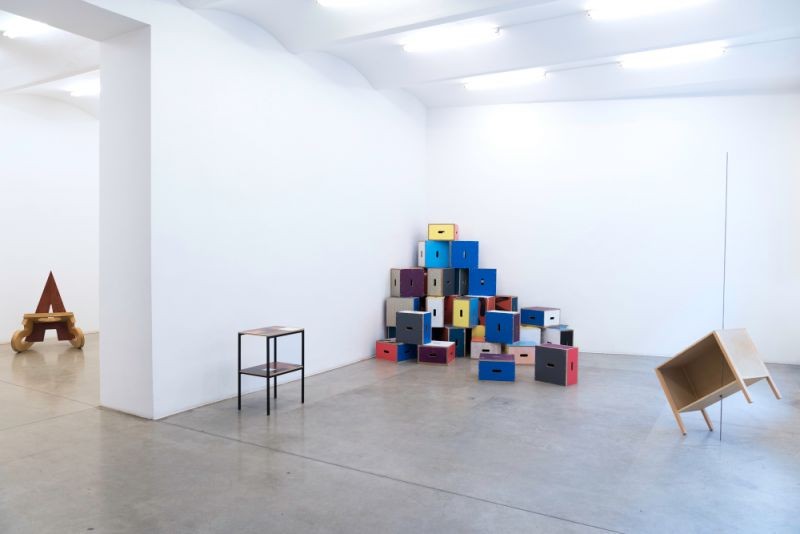 Furniture has always existed in an unclearly defined zone where life blends into art and art into life. There’s a utilitarian aspect to it—we need it to store our things—as well as a decorative one: one wants it to look nice.

In early minimal art, on the other hand, pieces of furniture were design objects that not infrequently mutated into nonfunctional art sui generis, thereby tossing classic design vocabularies into an entirely new intellectual context. The exhibition MOEBEL UND plays in a refined, provocative, and humorous way with the multifarious coding of meublements, with the gains of both pleasure and knowledge thus squeezed out being ends in a quintessentially Kantian sense. In this group show, which includes works from various decades by artists from different generations, “furniture” is, so to speak, a potentially flexible thing unto itself—a thing that can be configured to form diverse assemblages and be subjected to formal permutations associated with violence and passion.

It’s frequently about “Destruction in Art” (with a nod to Gustav Metzger), such as in the work A meteoric fall to heaven by Jimmy Durham, who has a large rock fall onto an armchair from the turn of the last century.

The artists’ collective G.R.A.M., on the other hand, throws a kitchen sideboard out of a fourth-story window and documents the act in a video.

Other artists in this exhibition work using situationist détournements—artists like that inexhaustible font of ideas Sepp Auer, who positions a small, open, two-legged cabinet diagonally such that it can’t be used in any way that makes sense, instead existing simply as a meaningless object in the heterotopic realm of purpose-free delight. Or like Valentin Ruhry, who installs a flamboyantly ornamental chandelier beneath a glass table, positioned just above the floor and before a magnificent photo wall by Margherita Spiluttini.

The chaotically stacked installation Tabourets cabanon by the artist Ovidiu Anton employs materials left over from artworks and exhibition modules, forcing them into an aesthetic frame derived from Le Corbusier. Here, a highly conceptualized formal language of design and "trash" in the form of objects taken from exhibition installations enter into a thoroughly intriguing morganatic union.

With his Name calling chair..., Vito Acconci created a seating sculpture that functions as a multiperspectival vehicle: the functionality of this “stool-in-motion” available to the user is twofold thanks to the interplay of the letters—which, with the current president of the United States talking about shithole countries, indeed does open up entirely new realms of the fantastical.

Peter Noever, designer and former MAK director, exhibits works including photos and posters of the Seating Pits that Walter Pichler realized on the site of Noever’s land art-inspired dream-buildings / building-dreams, about which Bernard Rudofsky wrote the following in 1988: “An Austrian Folly, an open labyrinth, set with Viennese elegance into a vinous landscape by a master of understatement.”“

The exhibition MOEBEL UND not only shows the formal variety of furniture from different eras and contexts of use but also evokes the constructive and/or destructive fantasies associated with these so-present yet oft-overlooked objects of everyday domestic life.

And with all that said, what better way to conclude than by quoting the blogger DasChair: “Poah, die möbälZ sind ja vohl kuhl.”