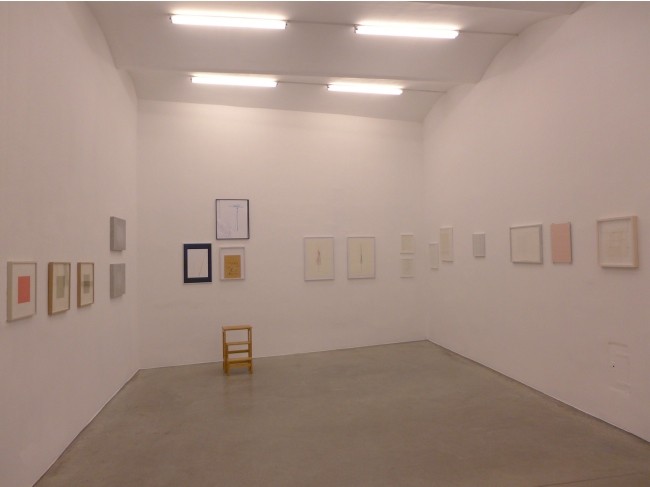 Under the term “sculptural drawings” is understood, in the strictest sense of the word, the graphic preparation for a sculpture. This is applied as a medium for sketching the idea for a sculpture or for a relief, and expresses the relationship between solids and voids by means of emphatically linear representation. Given the form-shattering upheavals in three-dimensional artistic creativity in the 20th century, which have been described by Rosalind Krauss using the concept “Sculpture in the Expanded Field,” sculptural drawing also freed itself from the functional work.

In the exhibition “On Paper”, curated by the sculptor/ metal sculptor and college teacher Sepp Auer, the term “sculptural drawings” is in this sense construed rather as a loose signet, which permits a multitude of possibilities of two-dimensional composition. Auer undertakes a broad survey of the art of the Second Republic with a few international guest appearances. From Wotruba-Student Josef Pillhofer to Bruno Gironcoli, Walter Pichler, Franz West, Erwin Wurm, Monica Bonvicini to younger practitioners such as Toni Schmale, Marusa Sagadin, Valentin Ruhry, Micha Payer&Martin Gabriel, Ovidiu Anton.

He exposes sculptural drawing as an open system, that often amounts to nothing more than the solipsistic reflection on possible- and impossible spaces, and, in the abstract evocation of the texture of the materials, allows the “Field of Things” (Heinz Emigholz), as an intellectual impression, to appear even more sculptural.

The renderings/photos by Erwin Wurm, which can be seen in the framework of “On Paper” and in which his entire bizarre Pluriversum seems to be contained as if in a nutshell, the collages with photos of complicated systems of pipes which Stef Heidhues has produced, the red rectangles semantisized with sense- and sense-destroying statements by Monica Bonvicini, or the cubes nested within one another by Antony Gormley, are all individual/idiosyncratic articulations of ideas of space. They are the proof of an attitude of experiencing the world within artistic parameters and making it the subject of creative expression.

Precisely in the restriction of form to idea, unfolds the richness which lies in the potential of that which is indeed thought through, but not completed.
www.christinekoeniggalerie.com