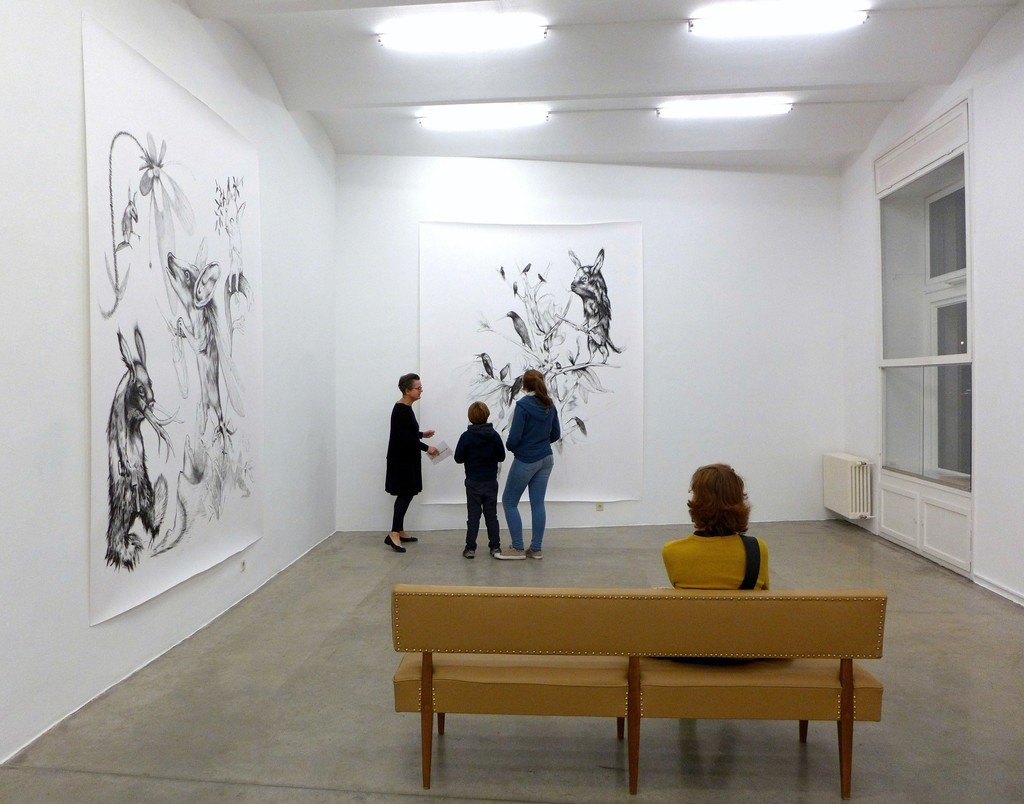 Per Dybvig is a traveller of the imagination, exploring white areas on the map and on the white drawing paper where no one has laid their hand before: unconventional arrangement of pictorial space, distortion of perspective and scale, strange details that defy the limits of realism, and almost virtuoso drawing techniques. Dybvig seduces us with precise craftsmanship to enter a world of imagery both beautiful and sinister, like scenes in an absurd play, or like fables where Aesop has lost his train of thought and forgotten the point of the story long ago.
The inspiration for the animations and the drawings that show variations on the hare theme comes from a woodblock print dating back to 1535: The Hunter Caught by the Hares, by Georg Pencz, where the hunter has been hanged from a tree and the hares are preparing for a feast. Dybvig distorts the stylised image of the Renaissance into vivid, rough drawings in his films and into delicate, sophisticated pen drawings. The bizarre, the twisted, and the carnivalesque are established as natural phenomena beyond this world, as André Breton points out in the catalogue for a 1921 Max Ernst exhibition: “Who knows if we are not in this manner being prepared for escaping the principle of identity?”
Dybvig’s draftsmanship is most certainly that of a surrealist; in drawings such as these, he does indeed let his characters escape the principle of identity: here we have a rat-moose on the operating table, a teaspoon-sized man with three hats flanked by a climbing pig, rat-like animals larger than men. These animal fables appear to be without moral perspective. Human beings and animals in situations completely askew: a trap for a fake dog, a drunken insect-man smoking two cigarettes at once, a pig with his friends on a hot day.
Dybvig leads us towards our outer edges of reasoning, towards the innate laughter of the dizzying imagination, towards the anarchistic edges of the carnival. The human assumes animal form; the animals no longer look like themselves. Is this a rabbit, a fox or a rat? Or is it in fact a rodent moose?
This is how Dybvig deflates both the Western myth about the lonesome rider and the traditional idea of hunter and prey. But by turning the animal kingdom into something unknown, Dybvig also creates his own taxonomy; faced with these pictures I see an interesting relationship between Dybvig's world of drawings and the taxonomy described in the opening chapter of Michel Foucault's book The Order of Things. Foucault quotes Jorge Luis Borges, who in turn quotes a Chinese encyclopaedia, where the animals are divided into: “a. belonging to the Emperor; b. embalmed; c. tame; d. sucking pigs; e. sirens; f. fabulous; g. stray dogs; h. included in the present classification; i. frenzied; j. innumerable; k. drawn with a very fine camel-hair brush; l. et cetera.; m. having just broken the water pitcher; n. that from a long way off look like flies."
AND: what do they look like, the big Landscape-drawings at Christine König Gallery in Vienna? They are drawn on one single piece of paper, measuring 240 x 420 cm – overwhelmingly large. The landscapes are distinct and open, as well as vague and closed; as a drawing the pictures have references to Oriental art and to ink drawings from several centuries back. But Dybvig does not merely copy; he shatters both tradition and our expectations of it. As in the animal drawings, where the laughter constantly finds its own shadow in that which disturbs us, the old Oriental tradition finds its shadow in a dybvigian distortion. It is no longer just a magnificent landscape; there is also an aggressiveness, with landscape elements piled on top of each other, like in the wake of a disaster, while at the same time they are being shaped into something organic – perhaps even erotic. They are so brilliantly and skillfully executed that Dybvig measures up to the old masters of the East.

(quot. "Drawing in motion" by Trond Borgen, published in Numer, No. 100/2014)
www.christinekoeniggalerie.com