Time For An Early Mark 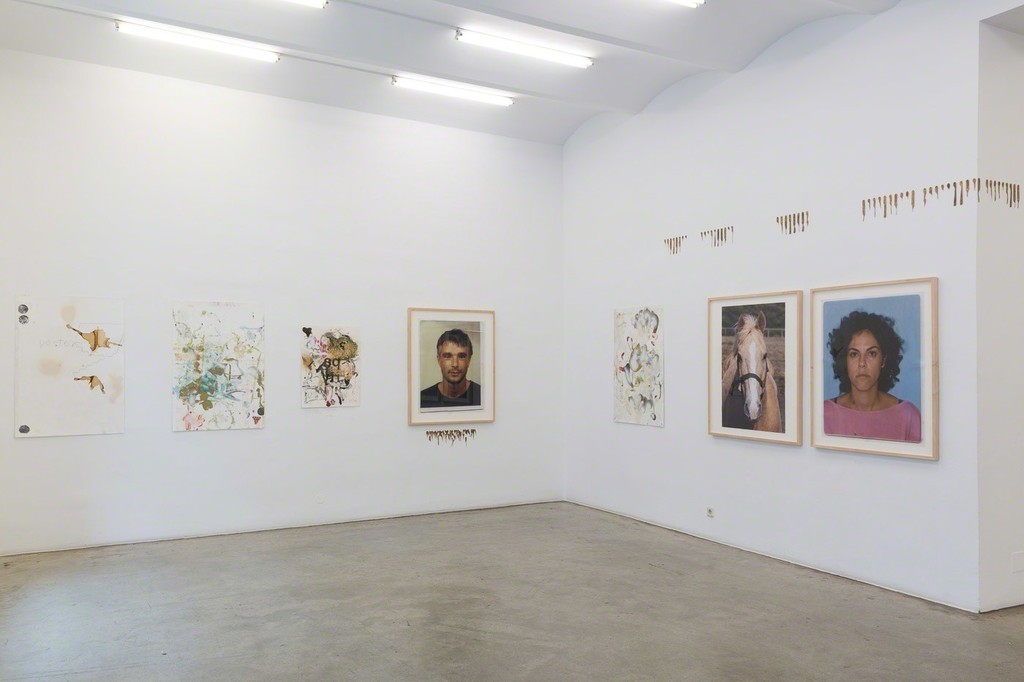 Uri Aran (b. 1977, Jerusalem, lives in New York) investigates the foundations of language and communication, the conditions of social interaction, and the workings of emotions. Characters, symbols, words, gestures, and images function, as a rule, as the starting point of artistic works within a practice that includes painting, drawing, photography, and film – all of which are re-contextualized to bring about a shift in meaning. The works, therefore, often suggest a narrative form that is characterized by great candor and appeals to the imagination of the viewer.

For his presentation in Vienna, Aran created a new group of works that touch upon the central theme of curated by_ 2017 in very different ways. The flat bronzes installed on the gallery walls, often only measuring a few centimeters, are vaguely reminiscent of letters or notes. There is a phrasing implied through their rhythmic arrangement and their structuring in the different areas of the exhibition space, one that seems to comment on the other presented works, but equally one that develops a meaning and impact that is detached from the surrounding objects. These metal works, even when placed within the limits of the genre of sculpture, recall the minimalistic, painterly positions of various art world figures of the 1970s. However, while earlier generations of artists were getting to the bottom of the conceptual framework of painting, Aran’s goal is to lay down narrative tracks.

A very similar intention is combined with the artist’s works on paper, which manifest in a decidedly wide range of forms and also evince references to classical modernism as well as post-war art. For one thing, there are works in the exhibition that come across, to some degree, as abstract: With few lines, forms, or colors, he creates compositions that escape clear interpretation but occasionally allude to another reality through the integration of numbers, letters, or photos. Then again, the presentation also includes drawings that are witness to a clear narrative pursuit, the physical expression of which ranges from portraits to still lifes and is sometimes comic-like, sometimes naturalistic, and gives the impression of being a part of a larger continuum.

Within the scope of the exhibition, these works will be joined by older sound and film pieces which not only facilitate greater insight into Aran’s varied oeuvre, but also a humorous examination of the relationship between words, names, and societal conventions. For example, in the work Untitled (Good and Bad), types of animals are named from a speaker that collective agreement have labeled either “good” or “bad.” A penguin, as a result, becomes the friend of a cat, while a rat, as a “bad” animal, stands on the side of the shark. The work touches on ethnological, sociological, and cultural-historical issues whereby its poetic impetus is at the forefront.
www.christinekoeniggalerie.com