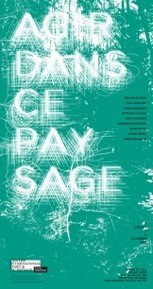 12 noon: Launch of the new art library annexe2:30 PM: Opening of the exhibition
With Mélanie Blaison, Julie Chaffort, Julien Dubuisson and Maggy Cluzeau, Anita Molinero, Dominique Petitgand, Reto Pulfer, Pierre Redon, Anne-Lise Seusse
The summer exhibition at the International Centre for Art and Landscape on Vassivière Island reflects different ways of acting in landscape through art. Sculpture, drawing, photography, sound installations and film: works by nine guest artists will speak, each in its own way, of human presence in a natural setting substantially transformed by use of resources and successive development projects.
This is the context for the generation of all sorts of situations, mises en scène and assemblages mingling tradition and artifice: tiny, anti-spectacular arrangements revealing an intimate, synaesthesic relationship with the textures, sounds and colours of the surroundings. In these places a single gesture, however discreet, suffices to evoke a ritual, and a mere fragment of one contains an entire language.
In the Lighthouse Dominique Petitgand is presenting the sound installation Proche, très proche (Near, Very Near), a blend of silence, the sound of different materials impacting and a voice describing the existence of invisible interconnections. Focusing on the interstices of language and the impossibility of defining things exactly, the artist invites us, as we climb the tower’s 117 steps, to a high-sensitivity experience of the building and its landscape.
In the Nave Reto Pulfer has stretched broad sheets of coloured textiles between the walls in a buoyant recreation of the interior of an ancient burial chamber. Painted like an impressionist landscape, this nomadic structure summons us to imagine the possible unfolding of a ritual like those this artist loves devising, somewhere between musical performance and concrete poetry. Outdoors, in the Sculpture Wood, a work made from recycled materials is exactly aligned with the stars.
Anne-Lise Seusse is contributing two recent series of photographs enigmatically recording human activity in landscape: Mont Verdun (Mount Verdun) looks at the marks left on the natural environment by a skeet-shooting range; and Pascal studies the actions of a man who has chosen to live out his personal spirituality. The latter series documents a living space shaped by quarrying and offers the structure of the man’s drystone hut as a means of capturing cosmogonic visions.
Anita Molinero’s Porcelaine blanche, polystyrène blanc (White China, White Styrofoam) was produced in 2003 by the Centre de recherche sur les Arts du Feu et de la Terre (CRAFT) in association with the Limousin Region Contemporary Art Collection (FRAC), whose thirtieth anniversary exhibition Molinero is curating. The work revolves around the transformation of matter: resembling a prehistoric trilith, this monumental all-white sculpture is an improbable encounter between the traditional glazed porcelain technique and totally synthetic polystyrene.
The Workshop morphs into a cinema for Julie Chaffort’s medium-length film Hot Dog, shot during her residency on Vassivière Island last year. In several sections portraying a world at once decadent and exhilarating, the film presents odd situations whose characters have to cope with the natural and the artificial. The landscape then becomes contemplative and dangerous, both for the participants and the viewers.
Up in the Study Room Mélanie Blaison is showing a big installation of indexical drawings made on bits of paper picked up during her walks. Based on a balance between the marks of unintentional wear and tear and the additions the artist has decided to make, each drawing emerges, through its colour and its texture, as a sensitive evocation of a landscape.
During his spring residency on Vassivière Island, Julien Dubuisson joined forces with Maggy Cluzeau to make Betula Pendula (bouleau) (Betula Pendula [Silver Birch]), a moulding of a tree trunk whose bark has been completely unrolled and presented on the wall. Another sculpture, Ghost Dance, is inspired by a ritual circle dance performed in clay by the artist, and reproduces the imprints of his stamping feet.
The exhibition closes in the Little Theatre with a new installation by Pierre Redon that is part of his Tülü project, whose title is the name of a type of Turkish carpet woven from angora goat hair. The carpet inspired the artist’s composition of a musical work visitors will be able to listen to. Various objects, music scores, planispheres and shepherds cloaks make up this participatory installation, which invites visitors to leave locks of hair for the ultimate weaving of a new carpet.
www.ciapiledevassiviere.com