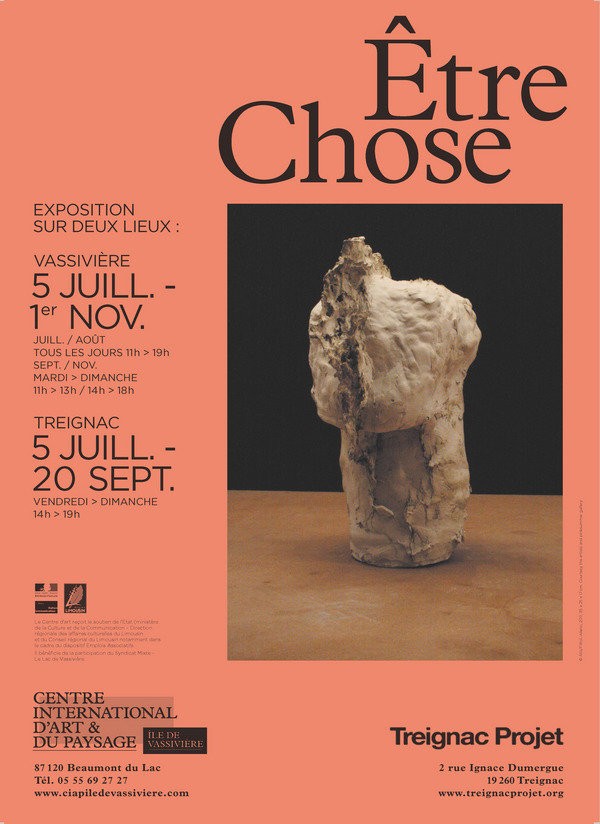 Different environments, human and non-human, coexist. These environments barely ever meet – when they don’t ignore each other altogether. Working at the boundary of these worlds, the artists of the Being Thing exhibition give substance and form to the possibility of an encounter.

What is it to be a thing? Is being human nothing other than being a thing amongst others? Can a thing be, without necessarily being human? The Being Thing exhibition brings together artists who attempt to give expression to an experience at the edges of the human. What becomes of the body when it ventures out to
the periphery of its self, when it rubs against the boundary of its own definition? The works gathered together here do not necessarily envisage the separation between humans and non-humans in terms of discontinuity. Bodies are ineluctably altered, fragmented and reassembled. They transform into indefinable figures, evolving at the crossroads of these worlds.
Being Thing also postulates that we cannot be named, that we cannot assign a name to each thing. It is to be wary of a world that would be solely human.

Projected in the Vassivière Lighthouse, the video Raptor’s Rapture by Jennifer Allora & Guillermo Calzadilla appears to be a key work – the improbable encounter of a flutist and a vulture, the exhibition’s only identifiable beings.
The art centre’s nave, dominated by David Musgrave’s Anthroposomething, brings together composite bodies. A figure spanning several realms, such as those portrayed by Benjamin Swaim, rubs shoulders with the sudden arrival of the monstrous in Alis/Filliol’s works. On the lower ground floor, in the studio, Basin Theology by Sterling Ruby evokes the relief of a meal or of a digestion of the world. Farther along, we stumble over a dog’s head, embalmed by Michael E. Smith.
The artworks in the study room invite us to deal with this fragmented landscape. The fragile strokes of Guy Mees’s drawings seem to respond to Jason Dodge’s sculpture in the form of a puzzle, whose scattered elements implicitly evoke an absent hand. The small theatre lets us glimpse a world beyond our reach, through the Animist portraits by Miriam Cahn, or the transformation of a domestic object into an imaginary animal by Reto
Pulfer.

At Treignac Projet, the exhibition summons floating bodies. On the ground floor, it opens onto a Machine Fantôme by Antoine Nessi, an ectoplasm of a bygone industrial era. The painting by Samuel Richardot seems to represent a thing almost as volatile as the dense clouds filmed by Diego Marcon. Upstairs, the artworks are the result of an alteration of human perception, following in the fashion of the sculpture by Bruno Botella, created specifically for the exhibition, and Alis/Filliol’s Alieno, which seems to have been modelled in a random way.

A little farther along, the traces of an unconscious presence fill Pamela Rozenkranz’s damaged monochromes, reflected by Untouched by Man, a kind of synthetic shroud, and by the tracksuit become fossil by Michael E. Smith.
Like an organ emerging from rubble, Glory Hole by David Douard records the fragile promise of a nidation. In a nook, Samuel Richardot’s auratic paintings blaze above Benjamin Swain’s dismembered idols.
The end of the exhibition reveals the huge and recumbent silhouette, Skeletal tape giant, by David Musgrave: the remains of a golem, which was originally nothing other than a paper embryo.

The Being Thing exhibition is spread out over two sites in Limousin, the Centre International d’Art et du Paysage de Vassivière and Treignac Projet, and devised by the artist Gyan Panchal, invited to be the exhibition’s associate curator. The hanging has been conceived around ‘atmospheres’ and demonstrates a subjective approach to the works as so many ways of being in the world. The exhibition makes its way from one space to the next in a cycle where fragments and condensations alternate. Artistic families which are poles apart, between excess and restraint, mix and mingle. Mainly comprised of objects, sculptures and paintings,
the exhibition contains few images, as though the latter were incapable of taking into account these forms of life.

Lastly, the subject of Being Thing falls within a current topic of art research where the anthropocentric interpretation of the world is being questioned more than ever. Instigated by artists’ work, by articles and symposiums (in particular The Matter of Contradiction organised by Sam Basu, Fabien Giraud, Ida Soulard and Tom Trevatt in 2012 on the Île de Vassivière), exhibitions dealing with the relations between mankind and the non-human have been on the rise: Animism in Anvers in 2010, Nature After Nature in Kassel in 2014, The Noing Uv It in Bergen in 2015, and Inhuman in Kassel at this very moment. While enriched by these reflections, Being Thing is above all based on the experience of the artworks which gave rise to the exhibition, and on a approach to the palpable and to perception marked by a proximity with nature rather than any particular concept or another.
Marianne Lanavère et Gyan Panchal
www.ciapiledevassiviere.com