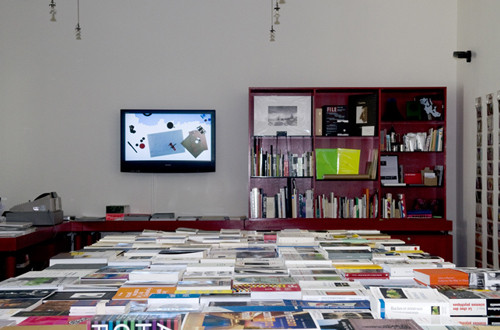 With Counter-History of Separation, Etienne Chambaud (1980, Paris) continues to question his notion of the " Beheaded Museum", a museum of objects that are always and already written, a museum that is as much an exhibition than a space of exclusions. The film giving its name to the exhibition, co-written with Vincent Normand, is a documentary which begins under The Reign of Terror with the simultaneous invention of the public museum and the guillotine, and ends up in 1977, year of both the last beheading in France and of the opening of the Centre Pompidou. Etienne Chambaud is interested in the moment of the dissolution of the political functions of the guillotine and the modern museum in what the artist seeks to define as the "Beheaded Museum", the space of the dissolution of the cut (the guillotine) and the genealogical suture (the modern museum).
The exhibition Counter-History of Separation explores the vertigo as the very condition of the exhibition, a permanent imbalance between the materiality of works and the language that supports them. In the Art Center, we will see a documentary film, an anchorage point, a restrained mobile, marble cartels, erected stones and an a scribble.