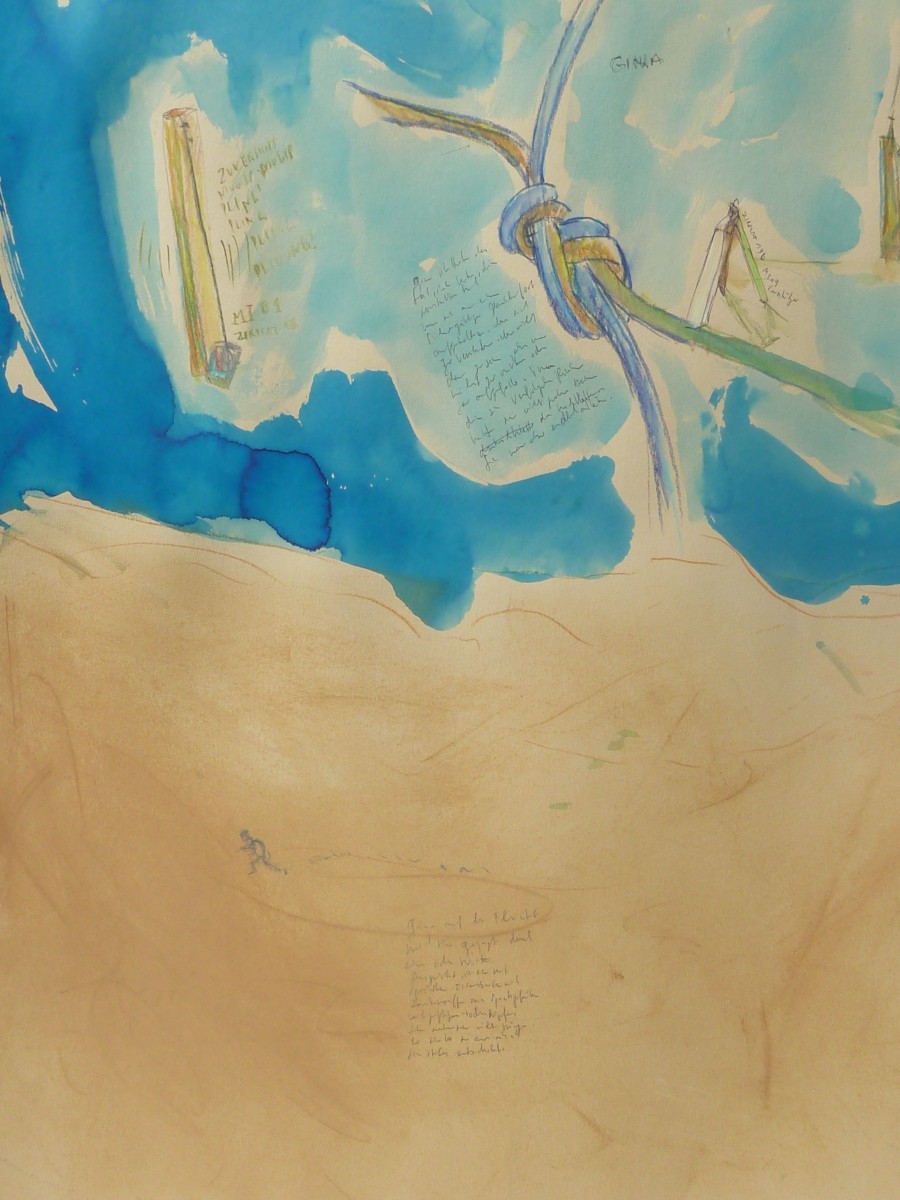 Gina, image of the coming sandstorm in the moment when she is persecuted. She is hauted in the desert(instruments), 2015.
Pastel, pencil, watercolour, pen on paper, hemp rope. 86 x 70 cm
Courtesy the artist and Hollybush Gardens 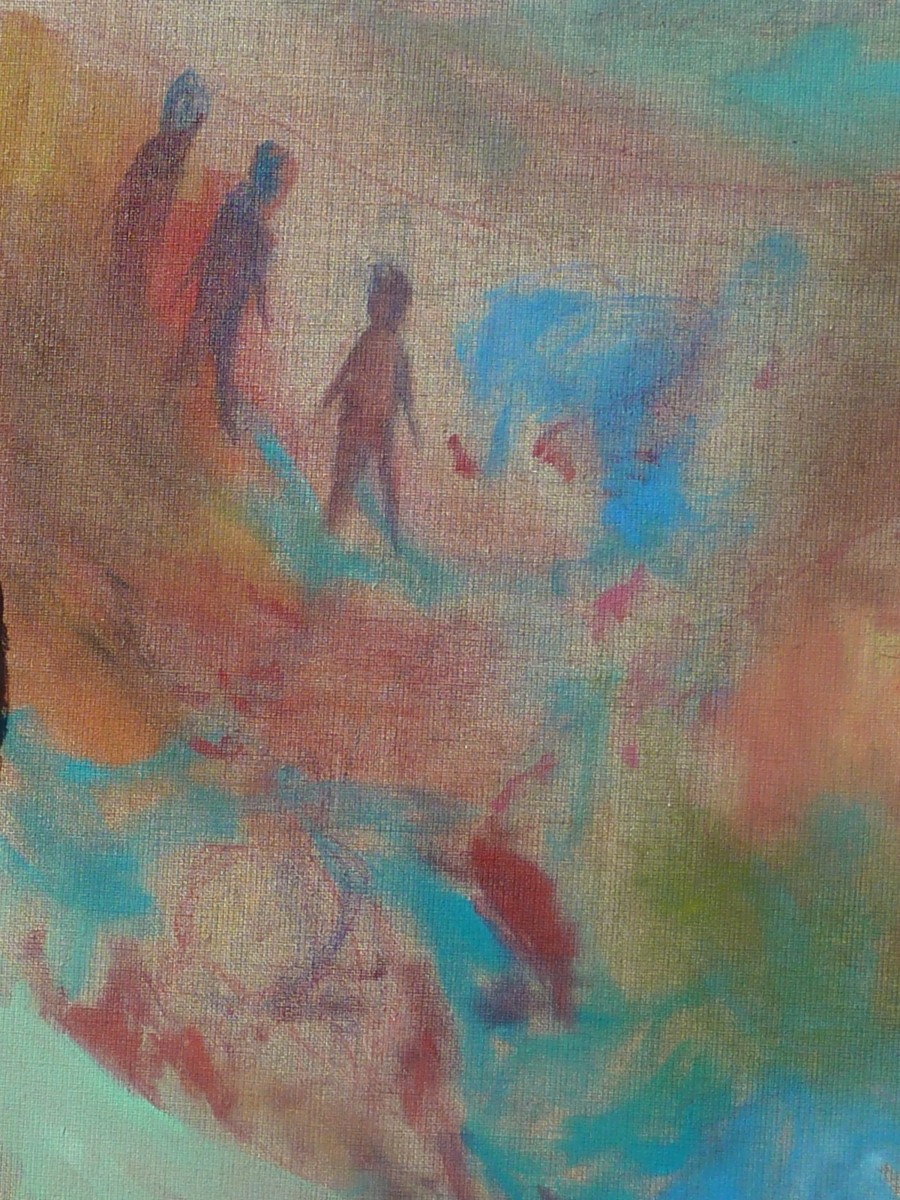 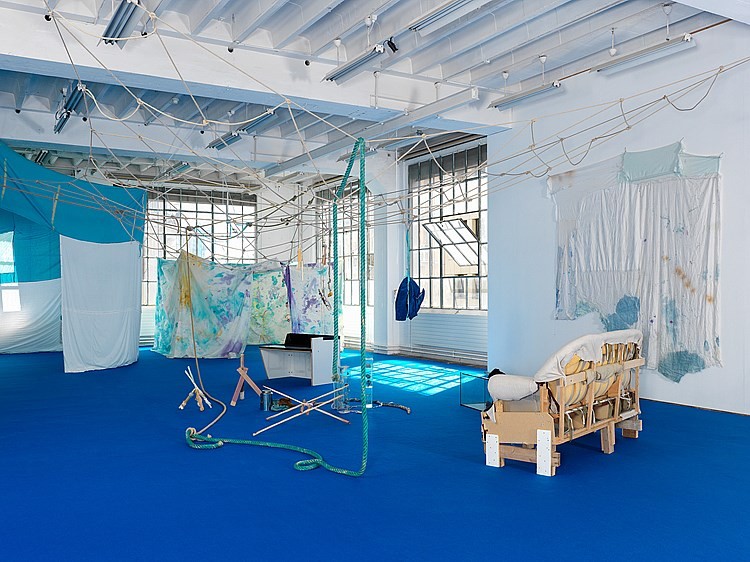 The Vassivière Island International Centre for Art and Landscape is welcoming Reto Pulfer for his first major exhibition in a French art institution. Considered one of the most promising artists on the current Swiss scene, he is presenting a group of textile works and artefacts made between 2008 and 2015, as well as new pieces for the art centre and its Sculpture Wood that take the Vassivière landscape as their inspiration.

On opening day the exhibition will be accompanied by a performance by the artist. The soundtrack will be provided by Reto Pulfer playing electric guitar, with added input from various objects and other instruments.

A self-taught artist, Pulfer uses painting, drawing, writing, music and found materials to construct distinctively intuitive, complex worlds evocative of total works of art. This invitation to the art centre is an opportunity for him to set up a connection between his new novel, Gina, and the singular history of Vassivière Island.

Reto Pulfer bases his work on intricate linguistic/mnemonic systems and creates his installations for the most part from recycled materials – in particular fabrics and paper – on which he draws and paints before arranging them into geographical explorations. For the group exhibition Acting in This Landscape at the art centre in 2013, he stretched large pieces of coloured fabric between the walls in a recreation of an ancient burial chamber. This summer, as part of Being a Thing, another group show at Vassivière, he showed the textile work ZR Autswaus O (2008), which uses a sofa cover to conjure up a marine creature.

The exhibition title Die Loci der Ortie is linguistically self-reflexive, with the artist playing on words from different languages: loci means «places» in Latin and translates as Orte in German, while ortie («nettle» in French) simultaneously signals the artist’s interest in the uses plants are put to and reminds us of the German Orte.

Designed as a pathway leading through a succession of tents and objects representing specific mental and physical states, Die Loci der Ortie is «a reflection of the starkness of the dam and the artificial character of Vassivière Island.» Pulfer sets out to transform Aldo Rossi and Xavier Fabre’s postmodern art centre building into a place for listening, remembrance and a pleasingly unexpected interaction between environment, sculpture, architecture and music. For this Pulfer has designed and made two new large-scale works: in the nave is an
installation referencing the rocky desert landscape of his novel; and in the Sculpture Wood is a spreading net inspired by the astronomical temples of antiquity and the artificial grottos of the 18th century.

RETO PULFER
Born in 1981 in Bern, lives and works in Berlin.
Reto Pulfer is a self-taught multidisciplinary artist whose practice revolves around synaesthesic environments comprising coloured fabric shapes, found and bricolaged objects, and improvised music and performances. His singular, hybrid worlds take the viewer to what he calls Zustand, a poetically conceptual state of transition whose components are, so to speak, immobilised for the duration of their exhibition. While exploring memory and its resurgences, Pulfer’s big installations come close to abolishing the boundary between the artwork and the person perceiving it.

Reto Pulfer has taken part in many international exhibitions. He has had solo shows at the Hollybush Gardens Gallery in London and various museums including ReMapKM in Athens in 2011 and Kunstverein Nürnberg in Germany in 2013. In 2015 he has had several big solo exhibitions in Europe, notably at the Centre d’Art
Contemporain in Geneva and Spike Island in Bristol (UK). He is rounding off the year in France, with a show at the Vassivière Island International Centre for Art and Landscape. In 2016 his earlier exhibition in at the Centre d’Art Contemporain in Geneva will be showing at the Forum Eugénio de Almeida in Evora, Portugal.
www.ciapiledevassiviere.com