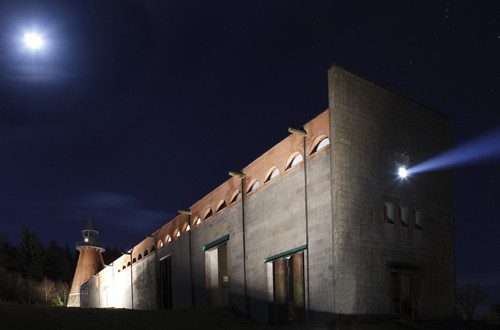 ROSA BARBA
"Is it a two-dimensional analogy or a metaphor?"

Rosa Barba is a born Italian film-maker who currently lives in Berlin.
In her films, Rosa Barba develops an interest in unusual places or improbable situations, which she films mainly in 16mm, sometimes using celluloid as well as pre-existing documents to create works that reflect on the structure of film both as a medium and as a physical presence. Based on social and cultural research, her films are conceived by assembling a set of very specific circumstances. She creates installations in which the spectator can find themselves observing a projector as a piece of sculpture, hearing its sounds and perceiving its movements.
Is it a two-dimensional analogy or a metaphor? presents itself as a process in which film and, more broadly, cinema, has been dismembered and divided into different components such as sound, pure light and the physical film tape itself: a first projector is placed in the lighthouse, built by Aldo Rossi, from where powerful beams of light are directed across the gallery building towards the small theatre. Here, at sunset, a second projector illuminates the waters of the lake where irregular movements underscore the mysterious submerged presence of a work formed by sound frequencies.