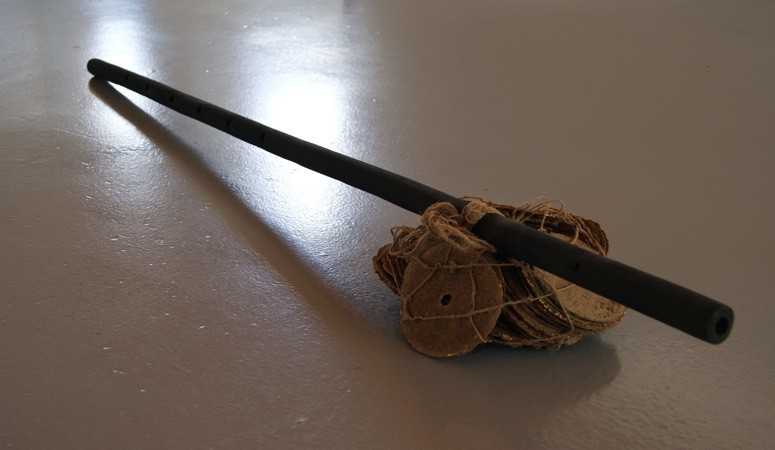 The Centre international d’art et du paysage is delighted to welcome artist Sheela Gowda (b. 1957, Bhadravati, lives in Bangalore) for her first solo exhibition in France: ‘‘Open Eye Policy’’, a travelling project initiated by the Van Abbemuseum in Eindhoven (curators: Annie Fletcher and Grant Watson), brings together twenty years of large installations, sculptures and photographs.
After exhibtions the Van Abbemuseum and Lunds Konsthal, ‘‘Open Eye Policy’’ has now been adapted to the distinctive 1980’s architecture of Ciap Vassivière and afterwards will continue on to the Irish Museum of Modern Art (IMMA) in Dublin this spring.

Gowda often works with distinctly pre-industrial materials such as cow dung, thread, string, and wooden chips but also with ‘waste’ from the frantic economic activity in today’s India such as the steel tar drums and plastic tarpaulins used for road construction. The exhibition title, with its simultaneous suggestion of receptiveness and vigilance, reflects the way the artist sees her surroundings.
THE ARTIST:

Born in 1957 in Bhadravati, India, Sheela Gowda lives and works in Bangalore. After graduating from the Ken School of Art in Bangalore in 1979, she pursued a postgraduate diploma at Visva-Bharati University, Santiniketan, India (1982). A a resident at the Cité des Arts in Paris in 1984, she then studied at the Royal College of Arts in London in 1986. She began her career as a painter. In the 1990s she branched out into sculpture and installations.

Sheela Gowda has exhibited internationally including Bose Pacia Gallery in New York 2006, Documenta 2007, the Sharjah Biennale of 2009, Venice Biennale 2009, Iniva in London 2009, OCA in Oslo 2010, and the Busan Biennale 2012.
In France her work drew favourable critical attention at the Lyon Biennial in 2007, then at the exhibitions ‘‘Indian Highway’’ at MAC Lyon (2011) and ‘‘Paris Delhi Bombay’’ at the Centre Pompidou in Paris (2011).

She is currently a guest on the DAAD berlin artist in residence programme.