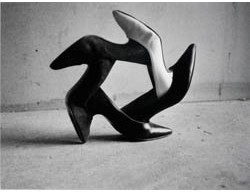 Fortunate Objects: Selections from the Ella Fontanals-Cisneros-Collection is an exhibition of familiar objects-domestic and industrial, intimate and impersonal, private and public-that undergo radical transformations, both conceptually and aesthetically, via the intervention of contemporary artists. In this exhibition, objects become contingent, uncertain, expanded, and improbable, while paradoxically also becoming more real as links between the spheres of art and daily existence.
Fortunate Objects is structured in three sections: The Appropriated Object or the Assisted Readymade; The Surrogate Object or Object Constructed; and The Object Used.
The Appropriated Object or the Assisted Readymade refers to the recontextualization of mass produced, everyday, and found objects in the form of assisted readymades, such as ‘Forever' Bicycles (2003) by Ai Weiwei; Made to Measure (crutches), 2001-2003 by Alexandre daCunha; Floor Flute (2003) by Robert Chambers; Standards and Double Standards (2004) by Rafael Lozano-Hemmer; and Carrito (más 3 dibujos) (2006) by Moris.
The Object Used involves the use of other objects to ascribe meaning and produce new forms or themes that echo or document and engage the original referent, such as Marina Abramovic's Rhythm O, 1974; Priscilla Monge's chalkboards series from 1999; Mona Hatoum's frottages of kitchen utensils; and Donna Conlon's Espectros urbanos (2004). Here the identity of the object is transformed to acquire an unexpected or unconventional meaning, which proposes both new uses and extended boundaries and life of the object.
The Surrogate or Constructed Object refers to works that in their making or conceptual grounds allude to or constitute objects of the everyday or of mass culture. Such works include Olafur Elliason's Blue double kaleidoscope (2005); Damien Hirst's The Blood of Christ (2005); José Antonio-Hernández-Diez' El Gran Patriarca (1993); Mateo López' Sleeping Box, (2007) and Jon Kessler's Favela (1986). These works replace and re-invent the common objects to which they refer. They question and challenge conventions related to issues such as: veracity, authenticity, reality, space; and ultimately the limits between art and life.
www.cifo.org